Renaud Lavillenie equalled his world Lead of 5.95m in the Pole Vault on Sunday (14) for the third and final day of French National Championships held in Paris in the Charlety Stadium.

Lavillenie had to stop his competition after his first attempt at 6.05m which was a bid to break his national record (6.01m outdoors, 6.03m indoors). “I hit the bar with my hand, giving me a haematoma,” said Lavillenie, whose gold-medal collection is missing just a World title. “I felt it was safe to quit, I don’t want to jeopardise my main goal.”

As a result, all his motivation is geared towards the IAAF World Championships in Moscow from 10-18 August. “The main thing is the victory. The huge performance, jumping 5.95m on my first attempt, is a very good sign for my World Championships prospects,” he said.

Jimmy Vicaut ran 9.95 twice on Saturday in the 100m. First in the heats, despite a 0.200 reaction time, he managed to run a relaxed race in 9.95 (0.9m/s). Having run 10.10 or better on seven occasions during the past three seasons, the European indoor champion was relieved to break the 10-second barrier at last.

“When I saw 9.9 on the screen, I felt thrills in my body,” said Vicaut. In the other heat, national record-holder (9.92) and European champion Christophe Lemaitre didn’t look good in 10.26.

Vicaut duplicated his performance in final with a better start (0.143) and less wind (0.3m/s). “I ran very relaxed in the heats, but in the final it was more difficult with Christophe and Manu (Biron) at my side. Now, I’ll have to do it again with bigger athletes in the race in Monaco (IAAF Diamond League).”

Lemaitre was deflated by his race, his first defeat to a French athlete outdoors since 2008. “I felt good before the final, but during the race there was nothing. I accelerate at the end but it was too late.”

The next day, he won the 200m title in 20.34 in Vicaut’s absence, bringing some satisfaction to conclude his weekend. “Unlike Paris (where he ran 20.07), I was alone coming off the curve, so it was difficult to chase the clock,” said Lemaitre. “It’s not bad after all of the races I had in two days.”

The biggest surprise came in the 100m hurdles with Cindy Billaud’s 12.59 as all the ideal conditions came together to produce great performances – hot weather, a reputed fast track and several hurdlers chasing the French standard for Moscow, 12.84.

In the heats, Billaud hit the seventh, eighth and tenth hurdles with her lead leg and still won in 12.75, a huge personal best from the 12.93 she ran two years ago and an improvement on her 13.03 season’s best. Before the final, her long-time coach Giscard Samba managed to keep the 27-year-old focused to make the necessary adjustments.

Reina-Flor Okori had the best start while Billaud closely followed. Defending champion Alice Decaux overcame a poor reaction (0.225) and remained in contention until hurdle five. But Billaud had a faultless race, displaying sharp technique and balance to win in a European-leading 12.59 (1.1m/s), with Decaux in second in 12.70 and Okori third (12.83).

“I’m not surprised as I was running a hand-timed 12.3 in training, I was just wondering why I wasn’t running well in competition,” said Billaud. “Charlety is my favourite track; I’ve always won or broken records here. I was very relaxed today and it came out naturally.”

The men’s race was won by Thomas Martinot-Lagarde in 13.30 while his young brother Pascal, who recently ran 13.12 at the IAAF Diamond League Areva in Paris, was waving to him from the crowds, temporarily side-lined due to a groin injury.

“Today marks two years and one day since my injury, and winning is a real relief. In good or bad shape, I keep jumping 17.40m, this consistency shows that I managed to fix the details. Rapinier is not at the top of his game yet, but watch out, he will be much better in Moscow!”

Mickael Hanany took the High Jump with 2.31m, just missing 2.34m. “That was the performance I was looking for, but I recently multiplied my competitions to achieve the required standard for Moscow, and I was not fresh enough to go higher, but the crowd pushed me. It’s fantastic to jump in Paris in front of his home crowd.”

Olympic silver medallist Mahiedine Mekhissi-Benabbad won a tactical 3000m Steeplechase in 8:46.57 with a storming last lap. “It was important to have a slow race, without pacemakers to be in danger to see how I can react.”

BACK
Pages related to this articleAthletes
Cindy BILLAUD 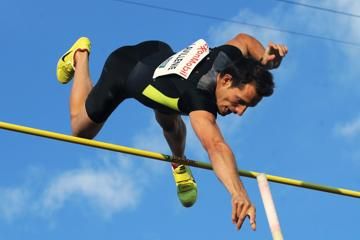