European champion Christophe Lemaitre produced the biggest surprise of the Meeting International Mohamed VI – an IAAF World Challenge Meeting – on Sunday (9) in Rabat as he defeated the pre-event favourite Justin Gatlin in the 100m with a wind-assisted 9.98.

Gatlin, who has the second-best performance in the world year (9.91) and sensationally beat Usain Bolt in Rome on Thursday, was forced to settle for second place in Rabat in 10.02, his first 100m defeat of the year.

While the US Olympic bronze medallist saw his 2013 winning streak come to an end, World 200m bronze medallist Lemaitre extended his with his sixth consecutive victory of the summer season so far.

“Beating Gatlin is an achievement in itself,” said Lemaitre, all too aware that Gatlin had defeated Bolt just days earlier in Rome.

Former World champion Kim Collins finished third in 10.10. The 37-year-old got off to a blistering start and led for much of the race before being passed by Gatlin, with Lemaitre storming through at the end to take the win.

Eusebio Caceres of Spain needed just one attempt to win the Long Jump. His first-round effort of 8.22m (-0.1m/s) was his only valid jump of the evening, but it was more than enough to beat Louis Tsatoumas of Greece (8.02m).

The other Moroccan win came in the 1500m. In the absence of Olympic bronze medallist Abelaati Iguider who currently has a minor back injury, compatriot Fouad El Kaam delighted the home crowd with his win in 3:34.68, holding off a fast-finishing Carsten Schlangen (3:35.07).

Olympic bronze medallist Thomas Longosiwa sprinted away from Bahrain’s Aweke Ayalew on the last lap of the 5000m to win in a season’s best of 13:03.58. Ayalew was rewarded with a huge PB of 13:05.00, while Bahraini team-mate Albert Rop set an Asian junior record of 13:09.84 in fourth.

Yoann Kowal, best known as a 1500m specialist, may consider a return to his steeplechasing roots after surprising himself in Rabat. The 2009 European indoor 1500m bronze medallist showed a great turn of speed in the final 100m to win the 3000m Steeplechase in 8:12.53, taking nine seconds off his PB and beating a field that included World and Olympic finalist Hamid Ezzine (8:13.27) and 2012 Olympic fourth-place finisher Roba Gari of Ethiopia (8:14.39).

Russia’s Olympic bronze medallist Ekaterina Poistogova ran a well-timed race in the 800m to set a meeting record of 1:59.80. 1500m specialist Siham Hilali had looked set for an emphatic victory until the final straight when Poistogova closed in on her huge lead before eventually passing her. Hilali was at least rewarded with a big PB of 2:00.20 ahead of Russia’s Ekaterina Kupina (2:00.45).

Ethiopia’s Hiwot Ayalew ran a similarly smart race to win the 3000m Steeplechase. On the final bend she was passed by Kenya’s Lidya Chepkurui, winner of the Diamond League meetings in Doha and New York this year, and the result appeared to be a foregone conclusion. But Ayalew found another gear just in time to pass Chepkurui and win by a narrow margin, 9:18.72 to 9:18.77.

Having won on his last two Diamond League appearances, LaShawn Merritt was an expected winner of the 400m here in 45.22 with US team-mate Josh Mance taking second in 45.65.

Spain’s Mario Pestano won the Discus by almost three metres with 65.79m, but the competition in the women’s Javelin was much closer. Olympic bronze medallist Linda Stahl won with 60.34m, but had her lead threatened in the final round by Latvia’s Madara Palameika (60.31m).

Elsewhere, Bohdan Bondarenko and Hanna Knyazyeva secured a Ukrainian jumps double. Bondarenko won the High Jump on count-back from Italy’s Silvano Chesani with 2.28m, while Knyazyeva was the only triple jumper to break 14 metres, winning with 14.29m.

Mohamed Bencherif for the IAAF

BACK
Pages related to this articleAthletes
Eusebio CACERES 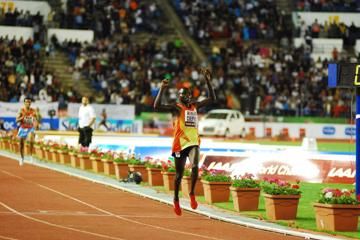