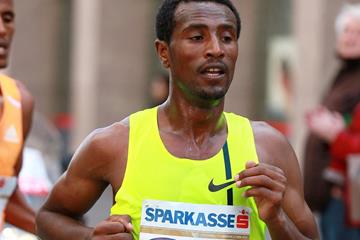 Lemma and Neuenschwander take the honours in Vienna

The Ethiopian broke away after 27 kilometres and despite battling with headwinds, he achieved the biggest winning margin in the history of the race, coming home more than four minutes clear of his nearest rival in the Austrian capital.

Ethiopia’s pre-race favourite and defending champion Getu Feleke, who clocked a course record of 2:05:41 a year ago, dropped out with a muscle injury just before 17km.

A five-man group, plus three pacemakers, passed 10km in 30:16 before two of the pacemakers gave up surprisingly early.

Feleke lost contact with the leaders at 15km before dropping out five minutes later and Eritrea’s Beyene Beraki then fell back just before the 20km mark.

At halfway, which was passed in 1:03:07, there were only Lemma, Kenyan debutant Suleiman Simotwo and pacemaker David Kogei, also from Kenya. Lemma, who had clocked his personal best of 2:07:06 less than three months ago in Dubai, made the decisive move not long afterwards.

When Kogei stepped aside shortly before the 27km mark, he surged ahead and Simotwo could not respond, the Kenyan eventually finished fifth with 2:14:42.

“I had to go and run alone because they were not running for me but if there would have been no wind and good competition until the final stages I think I could have broken the course record – this was my goal. I would like to come back next year and give it another try,” said Lemma.

“The people were very good. They said 'hop, hop' all the time and they pushed me to run harder,” he added.

It was Lemma's third marathon victory after winning in Carpi in 2012 and Warsaw the following year.

There was a big surprise in a competitive women’s race which saw the first five come home within 41 seconds of each other.

Switzerland’s Maja Neuenschwander won with 2:30:09 from the Kenyan pair of Agnes Mutune and Esther Chemtai, who clocked 2:30:19 and 2:30:32 respectively.

Neuenschwander and Ethiopia’s Fate Tola broke away from a group of seven runners just before the 15km mark and the pair went through in 1:13:35, running 34 seconds ahead of a group consisting of Hahner, Mutune, Chemtai and Chepkwony.

Tola, who was running her first marathon after maternity leave, started to falter at 29km and after the last pacemaker dropped out, Neuenschwander was on her own for the last 10 kilometres.

The Swiss runner was being chased from behind and at 35km her lead was down to 17 seconds with Chemtai leading the charge. But the 35-year-old Neuenschwander, who has a personal best of 2:29:42, had just enough left in the tank to hold on for the win.

“It was only shortly before the finish when I knew that I would win. This is the best moment of my career,” said Neuenschwander, who became the first Swiss winner in the history of the Vienna City Marathon.

“The wind was the problem, otherwise I would have run faster,” she added, admitting that she had hoped to improve the Swiss record of 2:27:44.

A record number of 42,742 runners from 129 nations entered the various events of the Vienna City Marathon.