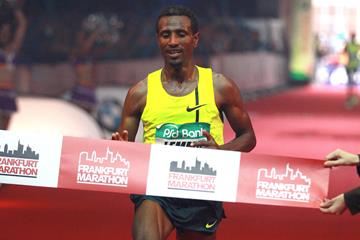 Sisay Lemma and Gulume Tollesa became the first Ethiopian duo to win both the men's and women's races at the Frankfurt Marathon when they triumphed at the IAAF Gold Label Road Race on Sunday (25).

In a thrilling finish, three men entered the final kilometre together but Lemma then had enough in reserve to pull away from his Kenyan rivals Lani Rutto and Alfers Lagat and win in 2:06:26, improving his best by 40 seconds. Rutto and Lagat were second and third in PBs of 2:06:34 and 2:06:48 respectively.

The finish in the women's race was even closer as Tollesa beat compatriot Dinkinesh Mekash in a sprint finish to win in a huge PB of 2:23:12. Mekash was given the same time in second place.

However, the biggest cheers of the day were reserved for the man who finished fourth, Germany’s Arne Gabius.

Gabius, now 34, ran 59 seconds faster than his debut in the same race a year ago and clocked the fastest time by a European runner this year.

A big group of 17 men, who enjoyed good weather conditions as temperatures hovered around 13-15C with overcast skies and no wind, reached the half way mark in 1:03:22.

Gabius initially lost contact with the leading group just after 25km and it started to look doubtful that he could break Peters’ long standing mark. By contrast, at 28km Lemma told the Kenyan pacemaker Wilfred Kigen to work harder and the pair pulled away from the chasing pack.

At 30km, passed in 1:29:33 and just before Kigen dropped out, Lemma had a 24-second advantage over a Kenyan quartet comprising Lagat, Rutto, Norbert Kigen and Suleiman Simotwo.

Lemma passed 35km in 1:44:26 and still had 20 seconds to spare over Rutto and Lagat, who were working together to chase down their Ethiopian rival and had broken away from the rest of the challengers. Further back, Gabius had recovered from his bad patch and was starting to steadily move through the field.

Four kilometres from the finish, Lagat and Rutto managed to regain contact with Lemma before the latter again surged with just a kilometre to go.

"I am very happy with the win, but I really wanted to run a time of 2:05," said Lemma, the first Ethiopian man to win in Frankfurt.

Gabius was understandably exhausted but elated after his record performance. "The second half was damn hard," he said. "Now I know what a marathon really means. There were times when I didn’t think I was going to get the record.”

Gulume Tollesa emerged as a surprise winner of the women's title in 2:23:12 as Ethiopian runners swept the podium places.

Tollesa ran a personal best by more than six minutes to beat Dinkinesh Mekash in a sprint to the line in Frankfurt's Festhalle.

Mekash was credited with the same time while their compatriot Koren Jelela continued her return after maternity with a fine third place in 2:23:52.

The three Ethiopians ran together after leaving the rest of their rivals behind just after 30km, which was passed in 1:41:36. Jelela then drifted out of contention for the victory a little under two kilometres from home.

“I thought I could finish among the first three since my training had gone very well," said Tollesa. "But I never dreamed I would win."