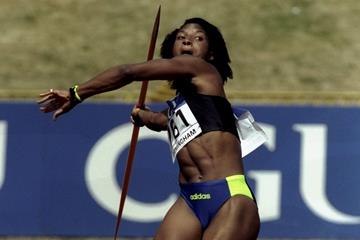 Lewis, recently troubled by a knee injury, entered four events here and her best performance was in the long jump where she finished second behind winner Jo Wise.

Lewis said: "There's no doubt about Seville and I believe I'm going to be very close to 100 percent fit for the championships. I think I have a realistic chance of winning a gold medal otherwise I wouldn't step onto the track."

Likewise, Kelly Holmes confirmed she had put the ongoing injuries which ruined her 1998 season behind her. Running the 800m under two minutes for the third time in the last month, she won the title for a fourth time in 1:59.86. Afterwards Holmes said she was keeping an open mind over which distance she will run in the world championships.

She said: "My focus is still definitely on the 1500 but I am trying to keep my options open.

In the women's 400m, Katharine Merry finally realised she is more gifted at that distance than her speciality the 200m, winning in a championship record 50.62sec, replacing the 1991 mark set by American Maicel Malone.

It was only a week ago that Merry finally persuaded her coach Linford Christie that the time was ripe to change her event.

The 24-year-old said: "I feel fantastic. I've gone from 10th to fifth in the world this year and I must be doing something right.

Jamie Baulch duly won the men's 400m in the absence of Mark Richardson, who was resting a hamstring injury.

Curtis Robb, another of Britain's walking wounded, had a less successful return to top flight action. After looking good in his heat and semi-final the three-times 800m champion slumped to bronze medal position in the final, 0.67sec behind Mark Sesay of Leeds who won his first senior title in 1:48.03.