Kibet on a quest to compete in Guaying

The men’s race was winding up when Kibet, 21-year-old Kipyatich and Bahrain’s Albert Rop suddenly went to the front and pulled the field apart. James Rungaru and Dickson Kurui, two other Kenyans, joined the leaders and a group of five athletes took command of the race.

Kipyatich ratcheted up the pace and Kibet was the only athlete able to keep up with him. Rop and Rungaru formed the next couple in places three and four, while Kurui dropped back and Dame Tasama, an Ethiopian resident in Belgium, moved up to fifth place.

Kipyatich and Kibet were battling in front taking it in turns to lead as the gap ahead of the chase pack continued to open up under the continuous pressure. But ultimately Kibet proved to be the stronger athlete as he made a tactical decisive effort up the final uphill section with about 500 metres remaining. He opened up a 50-metre lead and maintained that advantage until the finish line.

“I was confident about my race all the time,” said Kibet, who was cheered by the local fans as he is a resident in the country and represents a Belgian club. “I won here last year but on the other hand there were a few really strong guys in the field. Initially I wanted to attack with two laps to go but my opponent was always able to respond to my accelerations. I didn’t know him and therefore I preferred not to let the race turn into a sprint finish, even when I’m confident about my kick.

“I have been training well,” continued Kibet, “and my next goal is to qualify for the Kenyan team for the IAAF World Cross Country Championships in Guiyang. I must finish in the top six on 14 February at the Kenyan trials and I’m sure that I have a good chance to do so.”

Rop, who was beaten into third, was not too disappointed. “I started my training late this year and I knew that I was not competitive enough today to stick with the leading group,” he said. “But this race gave me confidence that I will gradually improve my form and I will be ready for the World Cross Country Championships as well. Be sure of that. Later this year my sights are set on the 5000m at the IAAF World Championships in Beijing.”

Rungaru finished in fourth place, Tasame was fifth and the young Belgian Isaac Kimeli came from far behind to finish in sixth.

The women’s race began in much the same fashion as the men’s. A group of four athletes made an early surge to the front and disintegrated the field. Ireland’s two-time European cross-country champion Fionnuala Britton worked hard at the front and was joined by Kipyegon, Chepngetich Keter and a third Kenyan, Perine Nengampi.

Kipyegon tried to break away from the field on the second of four laps, but Chepngetich responded, while Britton and Nengampi gathered behind.

Just as she had done in Nyahururu two weeks ago, the young Chepngetich passed Kipyegon on the final lap and never relinquished her lead.

Chepngetich is the world junior 1500m bronze medallist and formed part of the winning Kenyan junior team at the 2013 World Cross Country Championships. 2015 will be her first season as a senior, but her manager Marc Corstjens believes she is one to watch.

“Do not underestimate this young woman,” said Corstjens. “She does not yet express herself in English, but she has won three cross-country races recently in Nairobi, Iten and Nyahururu and she remains unbeaten this season. She is arguably one of the best athletes in her country at this moment.”

At one point, Britton looked as though she would lose the sprint for third place but she dug in deep and moved past Nengampi again in the latter stages.

“I’ve had so many unfortunate races this year that I really did not want to finish in fourth place today,” said Britton.

The awards were presented by cross-country legends Gaston Roelants from Belgium and Dave Bedford from Great Britain.

BACK
Pages related to this articleAthletes
Sheila Chepngetich Keter 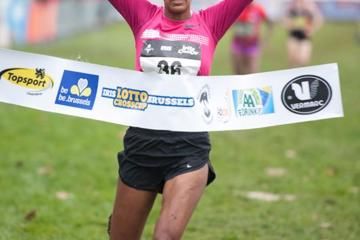 Hassan and Kibet take the honours in Brussels...