Kabuu close to course record at Run for Women in Albany

Kenya’s Lucy Kabuu, fourth at the 2014 IAAF World Half Marathon Championships in March, came home ahead of the more than 4000 at the 36th running of the Freihofer’s Run for Women over 5km in Albany, New York state, on Saturday (31).

Kabuu won in 15:21, nine seconds outside the course record of the IAAF Silver Label Road Race set by her compatriot Emily Chebet in 2010.

A leading pack of about a dozen runners stayed together through to just before the halfway point in the race before Kabuu, who had always been pushing the pace at the front and with the Ethiopian pair of Mamitu Daska and Afera Godfay Berha close by on her heels, moved away from the rest of the potential contenders for the podium.

Kabuu, a two-time Olympian over 10,000m, then moved into another gear over the final 800 metres to leave her two opponents trailing in her wake.

“I went back to Kenya to train for this race, that’s why I was so confident because I had that good training,” Kabuu told local reporters.

“I always try to run in the front from the start. I knew that the competition was tough but I always have courage when I’m running with other strong runners,” she added.

“I could see her (Daska), I got courage then little by little I started to go in front. I always have in my mind winning, winning.”

Kabuu hopes to be selected for her country's Commonwealth Games marathon team, hoping that they will forgive her for her disappointing 24th place finish at last year's IAAF World Championships and look instead at her credentials as one of the fastest women ever, having run 2:19:34 in Dubai two years ago and finishing a creditable third in a high quality race in Tokyo earlier this year.

Megan Hogan was the first US woman across the line in Albany, finishing sixth in 15:50. 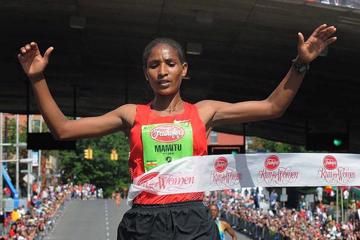 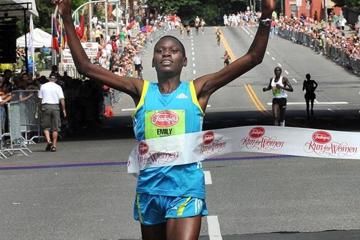 Chebet beats the heat to set course record in... 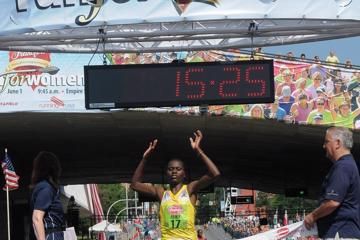