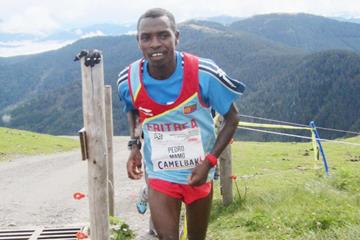 Eritrea’s Pedro Mamu, the 2012 World champion, was a clear winner at the AsitzBerglauf in the Austrian town of Saalfelden and he was followed across the line by two of his team-mates.

Yossief Tekle, the 2010 World junior champion, finished 28 seconds behind Mamu, while another Eritrean, Azerya Teklay, was third which was enough to come out on top overall in the WMRA Grand Prix rankings.

The Eritrean trio were the outright favourites and lived up to their billing from the outset. They started fast and stretched out the line of more than one hundred runners from 12 countries soon after the start.

In the third kilometre and on the steepest part of the 8km course with 1125m ascent, only Switzerland’s David Schneider could follow them. One kilometre later, the Swiss runner was simply not fast enough to follow the small group.

Mamu finally disposed of his team-mates at 6km, and then Tekle dropped Teklay after 7km. Mamu won in 46:01, while Tekle finished comfortably ahead of his compatriot, 46:29 to 46:55. Schneidner was the only other runner to break 49 minutes, finishing fourth in 47:13.

In the women’s race, Slovenia’s Mateja Kosovelj knew that her only chance against the experienced Italian Antonella Confortola would be to build up an advantage over the first 2km. She succeeded in doing that and maintained her lead to the end, crossing the line in 56:38.

Confortola finished 33 seconds behind and was the only other woman to dip under one hour. Iva Milesova of the Czech Republic was third in 1:00:13.

It was Kosovelj’s second victory in a WMRA Grand Prix race in this season, improving her position from second to first overall before the last Grand Prix race, which will be held on her home soil in Slovenia on 5 October.