Marschall's 5.70m the highlight in Mannheim

Australian athletes impressed at the Bauhaus Junioren Gala in the German city of Mannheim, not least pole vaulter Kurtis Marschall who cleared a world U20 leading height of 5.70m on Sunday (26).

That clearance, a national U20 record, propelled him to equal-eighth on the world U20 all-time list and is the best vault by an U20 athlete in three years, since a certain Shawn Barber cleared 5.71m in 2013.

Marschall not only put himself in the role of favourite for next month’s IAAF World U20 Championships Bydgoszcz 2016, improving his personal best by 15 centimetres, but by virtue of also being this year’s Australian senior champion, he booked his place on the plane to the Rio 2016 Olympic Games.

“This is absolutely insane," said Marschall. "I never expected to have a jump as big as the Rio standard in me this year. I’ve only attempted it a couple of times but this one was just perfect, everything about it was right. There was great conditions, I had my coach (Kym Simons) here with me, and it unfolded exactly as I wanted it to. I am absolutely over the moon. It’s just ridiculous.

“Ever since I started Little Athletics I wanted to go the Olympic Games. I have been a successful athlete as a junior, but I never expected to live my dream at this age. To be on the road to Rio at 19 is something very special. I am so privileged to just have the opportunity and I can’t wait to see what unfolds in the next few weeks and months.”

However, Marschall now has to rapidly shift his focus back to winning a medal in Bydgoszcz.

“Bydgoszcz is first though, and it’s a huge priority; that’s where I saw the highlight of my year coming from and I am pumped to compete there. I have the biggest jump in the world for athletes my age, but I can’t rely on that. I have to carry this form with me to the next event and on to Rio from there.

“The team environment I am in here, the support that I have around me here at the Australian camp, it’s perfect to make it happen so I’ll be doing my best to be the best I can be."

Marschall was not the only Australian to impress in Mannheim.

Jack Hale won the 100m in 10.38, having set a national junior record of 10.21 (1.6m/s) in the heats. “It’s a very pleasing result coming straight off the plane," said Hale. "It’s a big PB so I’ve got a lot of confidence moving into the next month before the big one in Poland.

“I feel as though stages of the race were perfect today. I’ve been practising that transition to the last 50 and I feel as though I’ll be a new athlete once I freshen up in the coming weeks. Since I landed I’ve been a bit tired, so that makes today even more pleasing."

Hosts Germany produced two world-leading junior marks to show that they should also be among the medals, at least in the women's field events, in Bydgoszcz.

Shot putter Alina Kenzel, sixth at last year’s European U20 Championships, went beyond 17 metres for the first time and by quite some distance when she sent her implement out to 17.48m in the first round.

Her compatriot, long jumper Sophie Weissenberg, added 21 centimetres to her personal best when she leapt 6.49m in the fifth round to equal the mark jumped by Bria Matthews at the US Junior Championships on Saturday.

Other good marks came in the sprint hurdles races, helped by some advantageous tailwinds.

Australia’s Darcy Roper won the men’s long jump by 29 centimetres when he flew out to 7.74m while his compatriot Ned Weatherley sent the 6kg junior hammer out to a personal best of 73.61m.

The best mark in the middle and long distance races came from France’s Baptiste Mischler, who was an impressive winner of the men’s 800m in a personal best of 1:47.17.

Phil Minshull (with help from Athletics Australia) for the IAAF

BACK
Pages related to this articleAthletes
Alina KENZEL 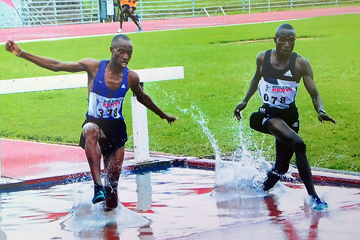 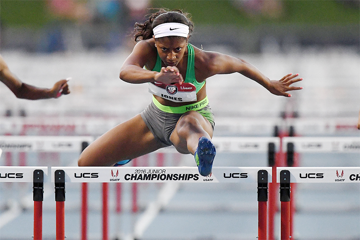