About 14,300 runners took to the start line at the famed ‘Promenade des Anglais’ in Nice, and the cool and sunny weather provided the perfect conditions to run fast.

As soon as the gun went off, a group separated itself from the rest of the field including Kenyans Kiptum, Victor Kipchirchir, Michael Chege, Bellor Yator, Michael Kiprotich and Ukraine’s Oleksandr Babarynka as well as the pacemaker Isaac Birir.

But the leading group was quickly whittled down to five men as Babarynka and Yator, who was the fastest man in the field with a PB of 2:08:39, couldn’t sustain the pace.

The first five athletes reached the 10km checkpoint in 30:16, putting them on pace for a finishing time of about 2:07:30, which is faster than the 2:08:40 course record set by Luka Kanda.

Then the rhythm slightly slowed down with the lead pack hitting the halfway point in 1:04:28. At 25km Birir stepped aside and Kiptum, who looked the strongest of the quartet, took the lead to maintain a steady pace.

Shortly before 30km Kipchirchir started to struggle to hold on. Kiptum, Chege, Kiprotich hit the 30km mark in 1:31:55, with Kipchirchir seven seconds behind. Kipchirchir then perhaps began to feel the effects of his efforts from the Warsaw Marathon six weeks ago where he ran 2:10:45.

Although the three men at the front were still running at sub-2:10 pace at this point, there was little doubt that the course record was safe.

With 10km to go, Kiptum, who finished second in this race last year, made a move and Kiprotich wasn’t able to stick with him. The latter would finish fourth in 2:14:13.

Kiptum and Chege remained together until the last climb of the race around the 35km checkpoint. Kiptum, 29, ramped up the pace and pulled away from Chege. The gap between the pair of Kenyans quickly increased but all athletes struggled in the final kilometres.

Kiptum eventually broke the tape in 2:10:44, just 15 seconds outside the PB he set last year at this race when he took almost eight minutes off his previous best.

Kipchirchir finished second in 2:12:23 and Chege, who fell behind in the last five kilometres, rounded the podium 25 seconds behind his compatriot.

In the women’s race, Jepchumba became the first athlete, both men and women, to win back-to-back titles in the brief history of France’s second-biggest marathon.

A duel with Emily Rotich, who was second last year, was expected, but Rotich had been forced to withdraw due to injury.

And so Jepchumba led a wire-to-wire race to win her second title over the marathon. Only Ethiopia’s Halima Haji tried to stay with her. The duo hit the halfway mark in 1:16:52 but Haji couldn’t hold on to the pace for much longer and was 1:30 behind Jepchumba at 30km.

The Kenyan, who was ninth at the 2005 IAAF World Cross Country Championships and won in a personal best of 2:33:52 last year, reached the finish line in 2:36:02, more than 10 minutes ahead of Haji. 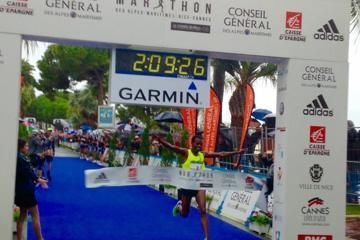 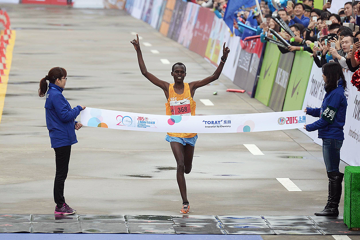 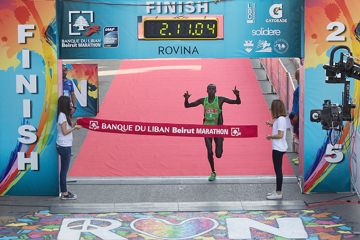