Ukraine’s Hanna Melnychenko moved to the top of this year’s season lists at the TNT Express Meeting in Kladno, the Czech leg of the IAAF Combined Events Challenge, while Andrei Krauchanka of Belarus won his second Decathlon of the 2013 series.

Melnychenko won the Heptathlon with 6416, 40 points better than Canadian Brianne Theisen’s result in Gotzis. Krauchanka, meanwhile, was just 10 points shy of his winning mark from Florence last month, winning the Decathlon with 8380.

European indoor bronze medallist Melnychenko has come close to winning at IAAF Combined Events Challenge meetings in the past, finishing second in Desenzano del Garda and Gotzis in 2009. But today in Kladno the 30-year-old finally triumphed and produced the second-best score of her career with 6416 – the fourth-best in the history of the Kladno meeting and just 29 points shy of her 6445 PB.

“I am very happy, it’s always nice to score over 6400 points,” said Melnychenko, who was 10th at last year´s Olympic Games and sixth at the 2009 World Championships.

“I hoped for result like this one in in Gotzis, but it was very cold there and I am the type of person who hates competing in cold,” said Melnychenko, who finished seventh in Gotzis with 6169.

Having led on day one, the Long Jump didn’t change the standings as the top three finished in the same order they were overnight. Melnychenko won with 6.46m, 12cm ahead of Karolina Tyminska, as Eliska Klucinova was third with a season’s best of 6.23m.

Melnychenko continued improving her results from her previous heptathlon in Gotzis with 39.63m, but Greece’s Sofia Ifadidou confirmed she was the best Javelin thrower in the field, throwing 53.46m – the only athlete to break 45 metres. Klucinova threw 44.30m in one of her strongest events, but it was more than five metres down on what she threw in Gotzis in difficult conditions.

“I am tired now, so I think my next heptathlon will be in Moscow at the IAAF World Championships, where I hope to improve my personal best, though there’s a possibility I will compete also at the Combined Events European Cup,” said a delighted Melnychenko, who returned to Kladno after three years.

Tyminska finished second in Kladno for the fourth time, but she was happy to show she is back in shape after recovering from injury and surgery last year. Her score of 6360 – the fifth-best of her career – puts her third on this year’s world list.

Klucinova confirmed Sletiste stadium in Kladno is her favourite place to compete. Her weekend score of 6190 is the third-best of her career with her two superior scores also achieved in Kladno, the city where she used to train before she moved to Prague.

“It’s always nice to compete in front of your friends,” said Klucinova, who achieved a World Championships qualifying mark. “It was a great Heptathlon for me except the last two events, where I expected better results.”

In fourth place, Katsiaryna Netsviatayeva of Belarus improved her overall lifetime best by 44 points to score 5984.

As the only decathlete to break 8000, Krauchanka’s win was a convincing one. Two-time World bronze medallist Dmitriy Karpov was not far away from the leader for most of the competition, but after poor 1500m the Kazakh athlete finished 402 points behind with a score of 7978.

In the first event of the day, Krauchanka had the slowest reaction in his 110m Hurdles heat, but he finished strongly to clock 14.14, extending his lead to 173 points over Karpov.

The gap between the pair closed slightly after the Discus, where Karpov threw 50.14m to Krauchanka’s 47.11m, and narrowed again after the Pole Vault. Krauchanka, the 2008 Olympic silver medallist, cleared 5.05m in Florence earlier this month, but could only manage 4.82m here in Kladno. Karpov, meanwhile, was the best pole vaulter in the field and cleared 5.02m. After eight events the difference between the top two was only 49 points.

However, in the Javelin Krauchanka extended his lead with 62.52m, his best throw for five years. Only Czech champion and former Javelin specialist Marek Lukas was better, setting a meeting record of 69.17m.

“I wanted to run faster, but I felt a little cramp in my muscle,” said Krauchanka, who now leads the overall standings in the IAAF Combined Events Challenge by 948 points.

He didn’t fulfil his goal of improving his score from Florence, where he tallied 8390, but now he owns the second and third-best performances in the world this year.

“Overall I am happy, only the Pole Vault was really bad. But I have enough time before Moscow, where I hope for 8500 points,” said the 27-year-old, who was finally able to finish a Decathlon in Kladno after two failures in 2007 and 2011.

“I like the Czech Republic because of its big Decathlon tradition,” added Krauchanka. “I grew up with guys like Zmelík, Dvorak and Sebrle, so I am always happy to compete here.”

The last time he finished two Decathlons in one year was in 2010, before picking up a string of injuries. This year he plans to compete at the IAAF World Championships in Moscow and then in Talence, at the last leg of IAAF World Combined Events Challenge. 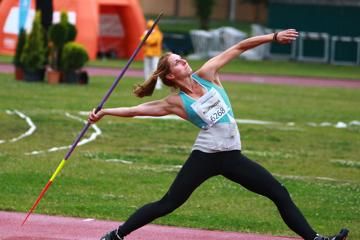 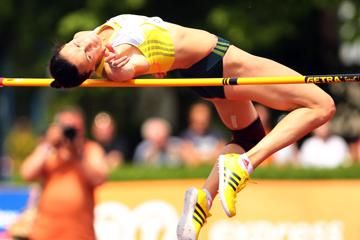 Krauchanka and Melnychenko lead overnight in ...