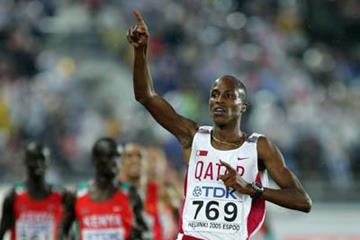 Setting up what Kenyan Eliud Kipchoge described as the championships’ “race of champions,” all the key players in the men’s 3000m advanced easily to Sunday afternoon’s final.

“I didn’t have to use too much energy,” said Kipchoge, after his first race at a World Indoor championship. Like Kipchoge, the three who followed didn’t appear particularly winded by their morning effort.

While Russian Pavel Naumov and American Jonathon Riley set the tone for the first few circuits, Shaheen and Kipchoge settled into the middle of the pack, using the race as a continuation of their crash course in indoor racing. Neither had raced indoors prior to this year.

“It’s very different from outdoors, “ said Shaheen, whose only previous indoor race was his 7:39.77 Area record at the Asian Indoor Championships last month. “The pushing, spiking, just too many things happening.”

Like his key rivals, Kenenisa Bekele comfortably advanced after his 7:54.85 win in heat two. In a blanket finish for the remaining automatic qualifying spots, Moukheld Al-Outaibi of Saudi Arabia and Shadrack Korir of Kenyan (each in 7:55.14) and Adil Kaouch of Morocco followed the Ethiopian into Sunday’s final.

“Sunday won’t be a race for a fast time, but it will be a race for a medal,” said Bekele after his first-ever appearance at a World indoor championships. “All the top athletes are here. Shaheen and Kipchoge will be my main challengers, but the other athletes, like the Moroccans, should not be overlooked. My brother too,” he added with a smile, “cannot be forgotten.