Caster Semenya is an unstoppable force in the women’s 800m, and so she proved again at the Meeting Herculis in Monaco on Friday (15), the ninth stop of this year’s IAAF Diamond League.

Semenya held the world lead coming into the race, and with a field also containing Margaret Wambui and Francine Niyonsaba, the second and third fastest women in the world in 2016, the pace was likely to be fast.

And it was. Katsiaryna Belanovich led them through 400m in 56.04 before wisely stepping aside to allow the race to kick off. Semenya had stuck to the pace from the start, and running at the front ratcheted it up even further to establish a solid lead over world indoor champion Niyonsaba.

The powerful South African stepped on the gas through the final straight, accelerating through the line to post a world-leading IAAF Diamond League record of 1:55.33, also breaking her own national record.

“I was expecting to run under 1:56, I am looking forward to gold in Rio,” said a buoyant Semenya. “You have to believe in yourself, and that’s what I did today.”

Niyonsaba ran a national record of her own, the Burundian stopping the clock at 1:56.24 to take second. Wambui, the world U20 champion from 2014, crossed the line in 1:56.64 but was later disqualified for a lane infringement.

The men’s 110m hurdles did not produce remarkably fast times, but it did deliver a captivating, if messy, contest.

World indoor champion Omar McLeod talked before the race about having to control his speed (he has run faster than 10 seconds for the 100m). He didn’t look able to do that here as he clattered each of the barriers. Though his raw pace kept him in it, one mistake too many at the final hurdle sent him sprawling to the floor and he crossed the line last.

Orlando Ortega was able to keep his head to win in 13.04. The win puts the Spaniard on top in the Diamond Race standings over McLeod, who is now second. European champion Dimitri Bascou was third, improving his personal best to 13.12.

Before the women’s 100m Dafne Schippers had stated her desire to run faster than the 10.90 she posted to take 100m gold at the European Championships. Though conditions were rather more favourable than in Amsterdam, a fast time was not needed to for the Dutchwoman to get the win.

Following the disqualification of Marie-Josee Ta Lou for a false start, Schippers started solidly before edging into the lead at 60 metres. No one could stick to her and the world 200m champion didn’t have to push to take the win.

“I felt in shape, the race was fine but the last 20 metres were harder. I could feel it,” said Schippers, who now leads the Diamond Race standings. “My competitors are fast and I like to compete against them to become faster.”

Veronica Campbell-Brown was second in 11.12, just ahead of South Africa’s Carina Horn in 11.14.

The men’s 200m did not produce lightning fast times either. It was a closer affair than the women’s sprint event, home favourite Christophe Lemaitre showing good speed endurance coming off the curve.

He was unable to stay with Alonso Edward, though. The 2009 world silver medallist edged ahead in the closing stages to win in 20.10 and solidify his place at the top of the Diamond Race standings.

“I’ve been working hard these last four years and the results are coming though,” the Panamanian said. “I now have to compete in London and then move on to Rio.”

Lemaitre came home second in 20.24, holding off Churandy Martina who claimed third in 20.29.

There were no surprises in the men’s 3000m steeplechase, which was the final event on the track. Conseslus Kipruto recorded his fourth straight win on the IAAF Diamond League circuit and now has an insurmountable lead in the overall standings.

He ran well within himself – no need to push with the Olympics coming into focus – yet was still by far and away the best in the field as he won in 8:08.11.

“I could have done a faster time today but I did not want to push myself to the limit,” the Kenyan said. “I preferred to smile at the finish line and save some energy for Rio.”

Second and third also went to Kenyan athletes. Paul Kipsiele Koech finished in a season’s best of 8:08.32, while Barnabas Kipyego recorded a personal best of 8:09.13. 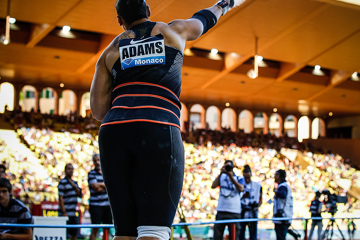 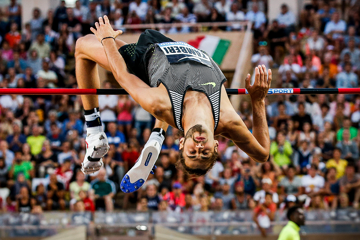