In the 100m it pays to run your own race. At pretty well every other distance, it pays to be aware of your opposition, too.

Amantle Montsho and Taoufik Makhloufi appeared to forget this at the IAAF Diamond League meeting in Shanghai, and they paid for it by being pipped on the line for the win in their events on Sunday (18).

Montsho apparently thought she had the field covered coming up the final straight in the 400m, with most of her dangerous rivals to her inside; Natasha Hastings, check. Allyson Felix, likewise. Francena McCorory was one to the outside, but close enough for the Botswanan to know she had her measure, too.

However, Novlene Williams-Mills is not the sort of rival you should forget about.

Out in lane eight, the Jamaican veteran is an IAAF World Championships minor medallist, a fixture in major finals and a multiple relay medallist.

As Montsho cruised to the line, Williams-Mills came driving home out wide.

Montsho appeared to win, was even given the bouquet of flowers and ushered along on a victory lap. Alas, it was Williams-Mills who had claimed the Diamond Race points, 50.31 to 50.37.

Winners are grinners, even if the loser is smelling of roses.

Makhloufi, the Olympic 1500m champion, was in the 800m here. Four men ran two-by-two up the straight. Makhloufi looked to be the winner when he gained the upper hand over South Africa’s Andre Olivier close to the line. He even smiled and spread his arms wide as he approached the line.

Robert Biwott, however, was not stopping for anyone.

Seemingly beaten 50 metres out, the 18-year-old world youth 1500m champion drove desperately to the line in lane three to edge out Makhloufi and win in a massive personal best by more than two seconds, 1:44.69 to Makhloufi’s 1:44.73.

In a close finish, Olivier held on for third, clocking the same 1:44.85 as Kenya’s Jeremiah Mutai.

Fortunately, Michael Tinsley does not know how to run anything but an all-out effort.

The world and Olympic silver medallist went hard to the line to overrun Mamadou Kasse Hanna, Bershawn Jackson and LJ Van Zyl in the 400m hurdles.

He had to, it was that close. The US athlete’s finish took him to a 48.77 win with the other three right on his heels.

A strong field, coupled with the still, cool conditions, seemed to promise a fast finishing time in the men’s 5000m but the early pace was relatively sedate at this level: 5:19.42 for the first 2000m indicated a final time about 13:20 at that stage in the race.

At the end of that, it was last year’s Diamond Race winner Ethiopia’s Yenew Alamirew who came through shining.

Alamirew won in 13:04.83, a meeting record in an event usually run in far tougher conditions than on Sunday, from Kenya’s Thomas Longosiwa and Ethiopia’s Hagos Gebrhiwet.

Cuba’s Lazaro Martinez was second with 16.76m and Chinese jumper Dong Bin third with 16.69m. Olympic champion Christian Taylor was fourth and Britain’s Phillips Idowu, the 2009 world champion, sixth as some big names struggled to make an impact in the competition. 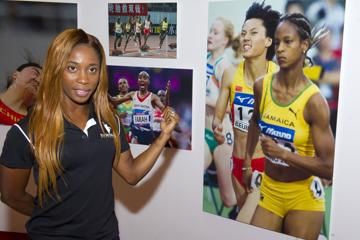 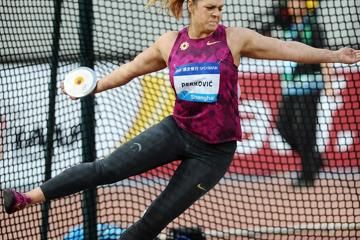 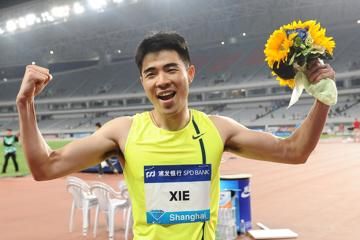