Running against men up to 20 years younger, the former barber stayed with the group of a dozen East Africans for just 10 kilometres before striking out by himself and building up an unassailable lead, which had stretched to two-and-half minutes at the finish.

Mungara came home in 2:16:42, possibly the oldest ever winner of an IAAF Gold Label Road Race, with colleagues David Tarus and Charles Kanyao following in 2:19:07 and 2:19:18 respectively for second and third place.

The expected hot and humid conditions that prevail in Singapore almost all year round inevitably kept the times slow, although Mungara later said that he had set out at the 5am start, when the thermometer already read 28 degrees Celsius, with a will to break the course record of 2:11:25, set by his compatriot Luke Kibet six years ago.

“I targeted the course record,” said Mungara. “But there was no one to help me. I was hoping someone would come along and push me. I’m still happy, but not very happy.

"It was very hot, but there was no problem. Next time I hope we can get four or five guys together. Next time, I would do better. It’s my last race of the year, so now I can go home to celebrate, and enjoy Christmas."

It was Mungara’s second victory in Singapore, four years after his first. But so successful has been his latter-day career, that the native of Limuru, some 50 kilometres north-west of the capital, Nairobi, has now won nine of his 15 marathons since 2007, with three second places as well.

Mungara was only enticed into running in his mid-30s, by the young marathoners who would come to his barber's shop.

“I looked at those little guys, and thought, ‘I can beat them’. But they were really tough, so I couldn’t at first. I couldn’t even train with them. I trained by myself and, after a while I went to a half marathon, but I had to drop out. But I saw my mistakes, and I learned."

Waganesh Amare didn’t have time to make any mistakes in the women’s race.

The young Ethiopian was only enlisted for the race as a last-minute replacement. Underlining a theory that you come down from altitude either several days or none before a race, Waganesh only turned up the night before, barely slept, due to the early start, then coped with everything the well-matched field threw at her before running away from her last rivals after 39 kilometres.

She quickly accelerated over the final three kilometres and won by close to a minute in 2:46:54, with the Kenyan pair of Elizabeth Chemweno and Pauline Wanganui second and third respectively, in 2:47:50 and 2:48:59.

“I wasn’t expecting it be this hot,” said Waganesh, via top-class interpreter, a certain Haile Gebrselassie, “so that’s why I waited so late to make a move to win."

As for Gebrselassie himself, he simply wasn’t expecting the competition to be so hot.

He had spent the majority of the two previous days fulfilling speaking and coaching engagements, and thought he might get an easy ride in the 10km race, but Solomon Keter had other ideas.

Fresh from a personal best of 29:04 for a Hong Kong all-comers' record one week earlier, and fully acclimatised to the region, Keter ran away from his Kenyan colleague, Thomas Maritim, and Gebrselassie in the final stages of the race, at which point temperatures had topped 30 degrees.

“That’s the worst humidity I’ve ever experienced,” said Gebrselassie. “I came here to enjoy myself, I wasn’t prepared. I didn’t expect the Kenyans. Next year, I’ll come just to run, and I’ll be prepared." 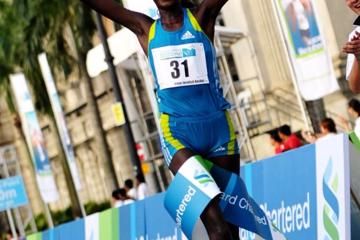 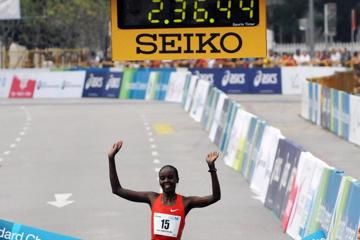 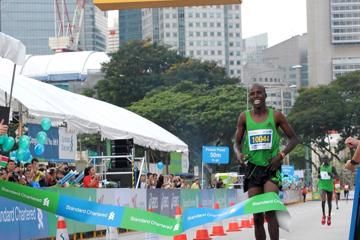 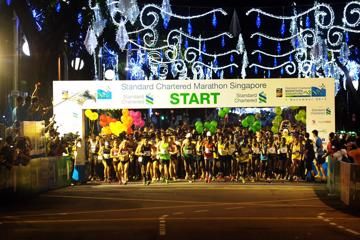 Chelimo and Cherop make it another Kenyan dou...