Edward Cheserek added another title to the two he won yesterday after winning the 3000m on the second and final day of action at the NCAA Indoor Championships in Birmingham, Alabama, on Saturday (13).

The University of Oregon student won the 5000m on Friday and then anchored his team to victory in the distance medley relay. His 8:00.40 3000m victory on Saturday was his 11th NCAA title and gave his team the expected maximum points in that event, contributing significantly to their convincing overall victory in the team competition.

“It’s good to keep my momentum going,” said Cheserek after becoming just the second man in history to win the NCAA indoor 3000m, 5000m and distance medley relay titles after Galen Rupp. “I’m trying to write my name up there like him (Rupp) again.”

Championship records for Baker and Weeks, world lead for Ziemek

Cheserek wasn’t the only athlete to etch his name on the NCAA indoor record books as championship records fell in two events on Saturday.

Ronnie Baker of Texas Christian University successfully defended his title in the 60m. The 22-year-old sped to a world-leading PB of 6.47 to take 0.04 off the previous championship record, set by Richard Thompson in 2008 before going on to take the Olympic 100m silver medal later that year.

In a close final, Houston’s Cameron Burrell finished second in 6.48, equalling the PB of his father, Leroy Burrell, whose lifetime best was a world record at that time.

The other championship record was set by Alex Weeks in the women’s pole vault. The 19-year-old Arkansas student cleared a PB of 4.63m to add three centimetres to the previous mark.

Georgia's Garrett Scantling led the heptathlon after day one, having equalled his 6.99 season's best in the 60m, leapt a PB of 7.28m in the long jump, produced his second-best ever throw of 15.73m in the shot put and equalled his 2.13m high jump PB.

But in the first event of the second day, the 60m hurdles, he was some way below his best with 8.35. Wisconsin's Zach Ziemek, who was just 23 points behind Scantling overnight, narrowed the gap to 14 points after the 60m hurdles but then shot into the lead after a 5.40m clearance in the pole vault.

With a comfortable margin going into the 1000m, Ziemek covered the five laps in 2:53.53 to bring his tally to a world-leading 6173. Spaniard Pau Tonneson, representing Arizona, finished 16 seconds ahead of Scantling in the 1000m to steal second place with 6027. Scantling had to settle for third place with 5951.

Sprint titles for Texas and Tennessee

The same two institutions took the titles in the men’s equivalent. Okolo’s Texas teammate Zack Bilderback won the 400m in 46.03, while Tennessee’s Christian Coleman won the 200m in 20.55.

The women’s 60m was just as close as the men’s final with just 0.01 separating the top two. Teahna Daniels broke the US junior indoor 60m record again – having done so with her 7.14 in the heats – to win in 7.11 from Hannah Cunliffe.

Having just scraped through to the final after clipping a barrier in the heats, Michigan’s Cindy Ofili sped to a British under-23 best of 7.89 to win the 60m hurdles.

Devon Allen, now focusing on athletics after a spell playing American football, won the men’s 60m hurdles in a PB of 7.56.

After disappointment in yesterday’s pentathlon, Akela Jones returned to win the high jump. She was some way off her 1.98m mark from the previous day’s pentathlon, but 1.87m was enough for victory.

Perhaps the biggest shock of the day came in the women’s shot. Raven Saunders had broken the collegiate record with 19.23m earlier this year, but she managed just 16.59m in the first round and followed it with two fouls, missing the half-way cut for the final three rounds. It left Dani Winters of Kansas State to take the title with 17.97m.

Oregon won the women’s team title, but it was a much closer contest than the men’s. Their only individual victory on day two came from Raevyn Rogers, who won the 800m in 2:04.68. 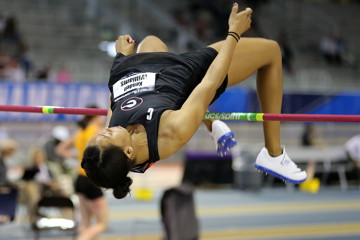 Collegiate records for Williams and Jones in ...