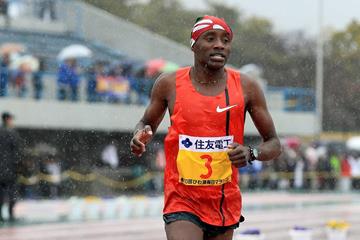 “I won because I trained hard,” said Ndungu, speaking in fluent Japanese after the race. “My goal for this race was to run 2:06, but because of steady cold rain, it was little difficult to run 2:06.”

Considering the difficult weather conditions, with cold and steady rain which sometimes fell quite heavily, his winning time of 2:09:08 was quite impressive.

“As you know, I spent six years training and competing in Japan, so the cold and rainy weather affected me less than my competitors,” he added.

Even more impressive was his winning margin of more than two minutes over a good quality field, the largest winning margin since Wilson Kipsang won by exactly three minutes when he ran the current course record of 2:06:13 in 2011. It was also the fifth successive sub-2:10 marathon for Ndungu, who becomes the first two-time winner since Spain’s Jose Rios took his second title in 2006.

The pacemakers were supposed to run an even three minutes for each kilometre but the race started with 3:05 for the opening kilometre and then varied from 2:55 to 3:14 over the early stages of the race

Ndungu was seen talking to the pace makers from time to time, well aware of the changes in tempo. “I asked the pace makers to keep the pace steady, not to accelerate and then slow down,” explained Ndungu after the race.

Just before reaching 30km, there was the curious sight of a pace maker handing his watch over to Ndungu.

“I left my watch in the (changing) room so I asked my friend to hand over his watch when he was done with the pacing duties,” said the winner.

Ndungu initially had trouble putting the watch on, and drifted to the back of the leading group, but by the time he was comfortable with his new accessory he was also ready to make his move.

When the pace makers left the race at 30km, passed in 1:32:06, the lead pack had slimmed down to 13 runners but Ndungu sharply increased the pace just before 32km. The Kenyan was only left with Meucci, Mongolia’s Ser-od Bat-Ochir and Japan’s Kazuhiro Maeda for company, before then quickly shaking off his three remaining rivals.

Ndungu covered the five-kiloemtre section from 30 to 35km in 15:06 while, by comparison, the chasing trio took longer than 15:40. The race for the first place was effectively over.

After Ndungu surged away, Meucci, Bat-Ochir and Maeda took turns in front in the race for second place.

After Maeda drifted away just before 37 kilometres, the duel between Meucci and Bat-Ochir hotted up with each taking turns pushing the pace in hope the hope of shaking off the other. They came into the Oji stadium together but, with 400 metres to go, Meucci – a 27:32.86 10,000m runner on the track – took off to clinch second place.