Nelvis hurdles world-leading 7.83 to upstage Lavillenie and Barshim in Malmo

Sharika Nelvis upstaged global superstars Renaud Lavillenie and Mutaz Barshim with the performance of the night at the Malmo Games, the US sprint hurdler flying to a world-leading 60m hurdles time of 7.83 on Wednesday (25).

Nelvis had showed she was in great form in the past two weeks, successively setting personal bests and world-leading times of 7.91 and 7.87 at the Millrose Games in New York and the IAAF Indoor Permit meeting in Birmingham on the past two Saturdays, but she won her sixth successive competition thanks to a blazing start.

"I knew I was going to race good," said 24-year-old Nelvis after the race, clearly set to make an impact in her first year as a professional athlete.

By the second set of hurdles, she was well clear of her rivals and the only question remaining was just how big her margin of victory was going to be.

Alina Talay confirmed her status as the gold medal favourite for next week’s European Indoor Championships but the Belarus athlete was 0.1 in arrears of Nelvis, finishing second in 7.93.

Lavillenie continued his unbeaten indoor season with a second-time clearance at 5.92m before three unsuccessful attempts at what would have been a world-leading 6.03m, having plenty of height with his second effort but just coming down on the bar.

He followed his standard protocol this winter by entering at 5.78m and making it with ease on first attempt.

But he wasn’t alone as both Poland’s Piotr Lisek and Russia’s Iliya Mudrov also cleared that height on their first and second tries respectively.

For the Russian it was an improvement of his overall best by no fewer than eight centimetres.

Mudrov could go no higher but Lisek also made 5.85m, in impressive fashion and just two centimetres shy of his recent national indoor record. It underlined the new level of excellence he has found in 2015. It was his fifth meeting at 5.80m or higher this winter.

As Lavillenie passed 5.85m, Lisek was actually in the lead when the bar was raised to 5.92m although the Pole was unsuccessful at that height.

Barshim concluded his four-meeting indoor campaign with another win, this time at 2.34m, but the Qatari was noticeably not in the same form that took him to an Asian indoor record of 2.41m in the Irish town of Athlone a week ago.

He was alone at 2.34m and needed two attempts to get over what was to be his winning height, clipping the bar with his heels as he went over although it stayed on the uprights despite wobbling frantically, before ending his night and his winter with three failures at 2.38m.

To be fair to Barshim it should be pointed out that even on this distinctly off day, he still cleared a height which only one other jumper in the world has managed this winter.

Another man unbeaten this winter is the evergreen St Kitts sprinter Kim Collins, who sped to a seemingly easy 60m heat win in 6.55 before winning the final in 6.52.

Collins, who turns 39 in a few weeks’ time, was as dominant as ever, accelerating to a distinct lead at the halfway point and maintaining it to the finish.

He would have gone even faster but for suffering a slight hamstring problem about five metres from the line and he finished visibly limping.

"I'm happy with the win but I'm feeling some pain, cramp," said the 2003 world 100m champion after what will almost certainly be the last race of a busy indoor campaign which saw him win at nine straight meetings.

He has run 18 races at nine meetings in 33 days and won all of them apart from one heat, averaging 6.514 in the finals.

Ahoure steps on the accelerator

Ivory Coast’s Murielle Ahoure won the women’s 60m in dominating fashion, clocking 7.14 with Ukraine’s Natalia Pohrebnyak coming through strongly in the second half of the race to take second in 7.26.

Cuba’s Orlando Ortega was just given the verdict over USA's Olympic champion Aries Merritt in the 60m hurdles, both men being given the same time of 7.52.

Ortega had to work really hard for his win as Merritt got out to an early lead and kept it until the final few centimetres.

The women’s long jump was an experimental event with jumps being measured from the point of take-off, as long as there was not a foul and athletes were on the board.

Although the performances will not appear in any world lists, it’s worth noting that Serbia’s world bronze medallist Ivana Spanovic won with what would have been a national record of 6.99m and had three other jumps better than 6.94m.

The jumps were also measured according to the conventional rules and Spanovic was still the winner with four jumps ‘legally’ at 6.76m or better, topped by 6.83m. With traditional measuring it would have been Germany’s Sosthene Moguenara who finished second as a ‘net’ 6.78m jump was a legal 6.75m.

Phil Minshull and A Lennart Julin for the IAAF 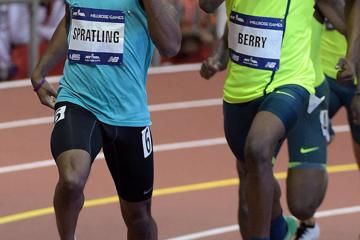 Two world bests – one expected and one surpri... 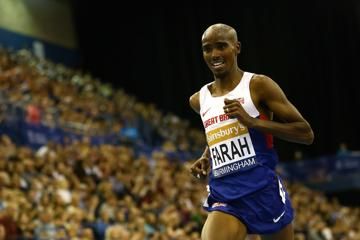