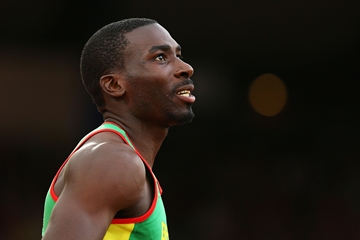 But Cuban duo Garcia and Rodriguez are stronger than their opponents on the second day and, barring a disaster, look set to win again when the competition concludes on Saturday (20).

Garcia went into the lead after posting the fastest time in the 100m with 10.94. But Felix, who clocked 11.17 in the 100m, responded in the next event with 7.44m in the long jump, easily the best mark of the day as no other man went beyond seven metres.

Felix held the overall lead after the third event, having thrown a PB of 13.80m in the shot. Garcia closed in slightly on the Grenadian with a throw of 14.22m, and fellow Cuban Jose Mendieta also moved up the leader board after throwing 14.71m.

The third Cuban in the competition, Olympic bronze medallist Leonel Suarez, didn’t start for the shot after hurting his achilles in the high jump. He decided to withdraw and recover in time for the Pan American Games.

As was the case in the long jump, Felix excelled in the high jump. His clearance of 2.10m was nine centimetres higher than any other athlete managed; younger brother Lindon Victor posted the next-best mark of 2.01m to move into third overall.

Garcia cleared 1.98m along with Juan Carlos de la Cruz of the Dominican Republic. It meant that Felix held a 215-point lead over Garcia going into the final event of the first day, the 400m.

Garcia was easily the fastest in the 400m and was the only man to run faster than 49 seconds, clocking 48.37. But Felix was the second fastest and so only gave away 31 points to the 2005 world youth champion, ending the day with 4215 points.

Felix’s current tally is just 13 points shy of his day-one score from the 2014 Commonwealth Games, where he took bronze with a national record of 8070. But Garcia – whose PBs in four of the five events on day two are superior to Felix’s – will be a real danger in the second half of the competition and could be set to win a record fourth title in this competition.

"I wanted a little bit more points," said Felix. "I didn't have a good start in the 100m. The long jump wasn't as good as I wanted it to be, but I had a PB in the shot, had a pretty good high jump and finished strong in the 400m.

"It's good to get some competition in before the Pan American Games and it's also fun to compete with my brother (Lindon Victor) to motivate and push each other. For day two, I hope to be able to do well in alll events, especially in the hurdles, one of my weak events."

2012 rematch for Rodriguez and Osazuwa

The first day of the heptathlon was a lot closer than the decathlon.

As expected, Commonwealth silver medallist Jessica Zelinka – who also made the Olympic final in the sprint hurdles – posted the fastest time in the first event, clocking 13.39 in the 100m hurdles.

Nigeria’s Uhunoma Osazuwa, competing as a guest as she did when she won this competition in 2012, was just 0.02 behind.

Cuba’s 2012 world junior champion Yorgelis Rodriguez, who had clocked 14.00 in the 100m hurdles, equalled her PB of 1.86m in the high jump. But Osazuwa was close behind with 1.83m and held on to the overall lead.

Yorgelis then unleashed a season’s best of 13.53m in the shot, her best mark ever outside of Cuba, to move into pole position as Osazuwa managed just 12.03m. Canada’s Jillian Drouin extended her margin over compatriot Zelinka, throwing 13.22m to maintain her third place.

Osazuwa ended the day by posting the fastest time in the 200m, 24.21. Despite the assistance of a 2.6m/s tailwind, Rodriguez was unable to come within half a second of that mark and ended her day with 24.77.

It meant that Osazuwa had made up the margin between her and Rodriguez with both athletes holding a score of 3703. The same two athletes filled the top two spots at the 2012 edition of this meeting with Osazuwa eventually winning with a national record of 6049. But she isn’t quite in the same form this year, while Rodriguez has improved since 2012.

"My No.1 goal here is to improve my tally from Gotzis," said the 20-year-old, who scored 6096 in the Austrian city last month. "I am feeling well. I am tied in the lead and I will do my best in the remaining three events.

"It is important to be here and regain the title I won twice. For day two, I will change my takeoff foot in the long jump and I am hoping for a good result there."

Looking to tomorrow, Osazuwa is a better long jumper than Rodriguez, but the Cuban is far stronger in the javelin and 800m. If she matches her season’s bests in the last three events, Rodriguez could even challenge the competition record of 6063.

Zelinka was almost a second faster than Drouin in the 200m and so ended the day in third place with 3518.

Jon Mulkeen and Javier Clavelo Robinson for the IAAF