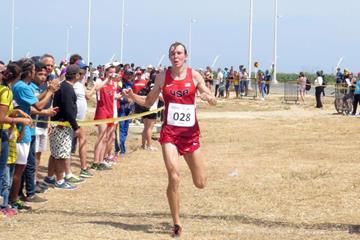 The event happened at the circuit adjacent to the Magdalena River, over a loop of 1.7km and in hot conditions.

Korolev, a post-graduate student in management science and engineering at Stanford University, produced  a late surge on the hard and flat course to win the 10km senior men’s race on his international debut in 28:21, with Brazil’s Gilberto Lopes finishing second but 10 seconds behind.

The American runner took a conservative approach at the initial part of the race as his team mate Gabriel Proctor, Ecuador’s Bayron Piedra and Lopes took command of the race and set an aggressive initial pace.

Piedra, always in the leading group, pushed the rhythm along with Lopes, Peru’s Yerson Orellana and USA’s Augustus Maiyo, with Korolev a little way back and running next to his compatriot Jonathan Grey.

The exciting race was decided in the final 600 metres when Korolev, sixth at the recent US Cross Country Championships in Colorado, launched a stinging attack to go past Lopes and Maiyo, the latter finishing third in 28:34.

With five men in the top eight, USA comfortably won the team title with just 15 points, well ahead of Ecuador (52) and Colombia (73).

The Peruvian 10,000m record holder, coached by the famed Mexican former marathon runner Rodolfo Gomez, was always in the leading group during the four-lap race.

During the second lap, Tejeda started to set a faster pace, initially reducing the leading pack to six athletes, before moving clear of her rivals.

“The heat was very strong as we ran close to midday, after the youth and junior races. My goal was to be in the leading group and my idea was to find a good pace before entering the last part of the race to avoid surprises”, explained Tejeda, who has generally been concentrating on long distances and was 26th at the 2014 IAAF World Half Marathon Championships.

Both Korolev and Tejeda will compete for their countries at the 2015 IAAF World Cross Country Championships in Guiyang, China, on 28 March.

Several of the medallists in the junior races will also have another taste of top level international competition next month.

USA’s Conner Mantz was second in 19:13 while Brazil’s Daniel do Nascimento took third in 19:20. USA won the team race with 20 points.

Woodhouse and MacDougall helped Canada to win the team race with 24 points, the only team title to evade the grasp of the USA.

Francisco Javier Albarracín won the boy’s race over three laps in 15:07 and Martha Guerrero took the girls’ event over two laps in 11:07.

A total of 20 countries and over 200 athletes participated in the event that served for many countries as preparation for the IAAF World Cross Country Championships in next month.

“We had great races and everybody enjoyed the competition in Barranquilla. The event is very positive for the whole area and we hope to bring it to other parts of the continent. Today we raced in hot conditions, but things will change and athletes will have to adapt; that’s the spirit of cross country,” commented Victor Lopez, IAAF Council Member and President of the Association of Pan American Athletics.