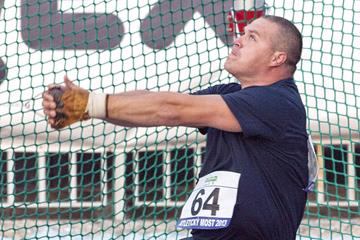 Hungary’s Krisztian Pars got a modicum of revenge for his surprise defeat by Poland’s Pawel Fajdek at the IAAF World Championships last week when he produced a 2013 world-leading 82.40m at the 11th Athletics Bridge meet in the Slovak town of Dubnica on Wednesday (21).

The meeting was part of the IAAF Hammer Throw Challenge but the Olympic champion was pushed hard by Fajdek, who achieved a personal best of 82.27m and maintained his place at the top of the men’s Challenge standings, although just by six centimetres.

The one final event for the men in this year’s IAAF Hammer Throw Challenge is at the IAAF World Challenge meeting in Rieti, Italy, on 8 September and Wednesday’s result means that there will be a thrilling climax to the race for the US$30,000 first prize, which Pars won in 2011 and 2012.

Competing in the main stadium in front of around 4000 spectators, but with just four attempts, Pars started with a 80.94m meeting record and Fajdek replied with 80.66m. In the second round, Pars was again over 80 metres with 80.73m while Fajdek had a foul.

Pars again improved the meeting record to 81.54m but then Fajdek answered with huge throw, a personal best and 2013 world-leading mark of 82.27m.

However, Pars showed his competitive mettle and launched his implement out to 82.40m, another world lead and meeting record, and just five centimetres shy of his personal best which has stood since 2006. Fajdek was unable to respond and fouled again.

"The conditions were excellent. I’m happy I was still able to throw that far after the World Championships where I had problems with my shoulder," said Pars.

Slovakia’s Moscow finalist Marcel Lomnicky was the best of the rest with 77.91m, beating Czech Republic’s World bronze medallist Lukas Melich who threw 77.83m. Unfortunately, Slovenia’s 2008 Olympic champion and 2009 World champion Primoz Kozmus suffered back problems while warming up and could not throw.

Before the women’s competition, Poland’s Moscow silver medallist Anita Wlodarczyk was already close to 75 metres while warming up and so some big distances were anticipated.

The 2009 World champion began with 74.79m and then reached 76.16m for a meeting record. Following a third-round foul, she then threw 78.22m, which is the seventh best throw ever and just 24cm short of her own national record which she threw in Moscow.

With two events left in the women’s Challenge, Wlodarczyk is in pole position with 232.74m, the cumulative distance of her best three performances in Challenge meetings.

In the other events, the first sub-10 100m in Slovakia was achieved, albeit wind-assisted with a with 2.5m/s breeze, by US sprinter Mike Rodgers with a splendid 9.90. Jamaica’s Nesta Carter was second in 9.98.

Canada’s Moscow bronze medallist Derek Drouin cleared his opening height of 2.21m only on his third attempt, but then jumped 2.26m and then a meeting record of 2.33m with his first tries before calling it a day.

Two Czech pole vaulters went over 5.68m for what was another meeting record, with Jan Kudlicka beating Michal Balner on count back.

There was also a surprise win for Bulgaria’s Georgi Ivanov in the Shot Put with 20.25m over Canada’s Moscow bronze medallist Dylan Armstrong, who could only reach 20.15m.