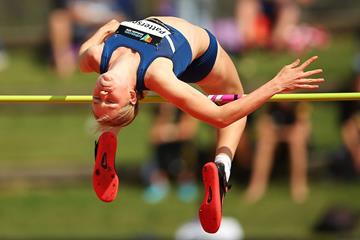 If the aspirants for the forthcoming IAAF World Youth Championships who competed at the Australian Junior Championships, which concluded after four days of competition on Sunday (15), were looking for inspiration as they strove to make the team for Cali this year, they needed to look no further than the high jump apron where world youth champion Eleanor Patterson was competing.

Patterson equalled her national junior record of 1.96m in winning the junior title. She then narrowly missed on each of her three attempts at 1.98m, which would have equalled the national record and provided an outstanding example of the opportunities available for the young and talented.

Jack Hale, whose name rarely appears these days without the attached descriptor ‘Tasmanian sprint sensation’, was one of 12 athletes competing in the under-18 division at the championships to book themselves a guaranteed place in the team for Colombia.

He won the 100m and 200m in Sydney on the weekend and will run both sprints in Cali.

Wind is the other thing that seems to follow Jack Hale around.

He earned the sprint sensation tag at the Australian All Schools Championships in Adelaide last year when he ran a sizzling 10.13 (3.8m/s) after officials obligingly turned the 100m sprint finals around rather than run them into strong headwinds.

That performance made Hale the fastest youth all-time, under any conditions, and led to a deluge of publicity not seen for an Australian junior sprinter since the long-ago days of Marjorie Jackson and Betty Cuthbert.

Hale headlined the Australian domestic tour meeting in his home town of Hobart in January; again, an unprecedented situation for one so young.

It also led to another unprecedented happening on Sunday afternoon: a full press box on the final day of the Junior Championships to see Hale run.

However, after perfect weather for athletics the previous day, Sunday afternoon brought wild and squally conditions.

The weather blew up just before the 100m sprints were due to be run, prompting officials to again switch them to the back straight.

Certainly the wind did its bit, Hale’s final was boosted by a 2.8m/s breeze, but the Sydney track is set in a bowl so the reading would not have been uniform all along the 100m as it was along the wide-open Adelaide back-straight.

Sydney’s older track was also still wet from the rain and the temperatures plunged suddenly downwards. Nevertheless, Hale still won his race by more than a metre in 10.38.

“I just had to come out today and produce," said Hale. "I think I ran a half decent race, conditions wise, the track surface being wet and stuff, I’m pretty happy with it. There are still a lot of things I can work on, but I’m happy overall with the performance. I don’t want to say too much because I don’t want to sound like I am making excuses but I’ve only had about a week’s worth of real preparation so it’s good."

Of the boys still eligible to compete in the youth category in 2015, Weatherly ranked second last year, his personal best of 79.03m behind only the 79.94m by Ukraine’s Hlib Piskunov.

Several other athletes have achieved the minimum requirement of twice achieving the Australian standards and are likely to be added as discretionary selections when the team is finalised.

The announcement of the team is expected late this week or early next, with combined eventers to be added after their trials, which will be conducted at the Open national championships in Brisbane on 26-29 March.