World silver medallist Pedro Pablo Pichardo has a habit of jumping a PB in his first competition of the year. So why break a habit of a lifetime?

Pichardo, the 2012 world junior champion, began his series with a leap of 17.34m and then improved to 17.52m (-1.7m/s) in the second round. The wind then died down in the third round as he flew out to his winning leap.

Happy with his day’s work, and having added exactly a metre to Will Claye’s world lead, Pichardo passed his final three attempts.

"I knew it was good and I expected to jump farther than 17.50m, but not such a big leap," he told local reporters. "Considering I had a year without jumping, I lacked a bit of rhythm.

"Now I'm looking to break the 18-metre barrier and to win the world title."

World youth and world junior champion Lazaro Martinez, still just 17 years old, finished a distant second with 16.73m in what was also his first competition of the year.

Pichardo’s previous PB of 17.76m was set last year in what was also his first competition of the season. He went on to take the bronze medal at the IAAF World Indoor Championships, following it up with a 17.71m leap in late March, but then sat out the rest of the season.

He now moves to sixth on the world all-time list, just two centimetres behind Olympic champion Christian Taylor and 10 centimetres behind world champion Teddy Tamgho. Pichardo will face both of those at the IAAF Diamond League meeting in Doha next Friday.

The other top mark from the competition came from Denia Caballero. The two-time World Championships finalist added more than two metres to her PB to win the discus with 67.87m.

Her winning mark moves her to sixth on the Cuban all-time list.

Jon Mulkeen (with assistance from Andrea Buongiovanni) for the IAAF

BACK
Pages related to this articleAthletes
Pedro PICHARDO 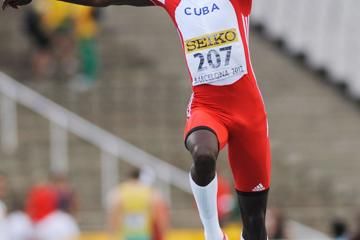