For the third year in a row, Croatian discus thrower Sandra Perkovic opened her season with a throw in excess of 70 metres at the National Winter Throwing Championships in Split.

Competing at this year’s edition on Sunday (6), the Olympic champion opened her series with 68.04m before improving to 70.59m in the second round. It remained her best of the day after throwing 68.44m in round three and then fouling her remaining tries.

But, unusually for this competition, Perkovic wasn’t the only headline performer.

World junior bronze medallist Sara Kolak improved her own national javelin record for the second time this year. Having thrown 60.24m last week, the 20-year-old unleashed a throw of 62.75m with her penultimate effort of the competition.

The best performers among the men’s events came from Stipe Zunic, who threw 20.60m to win the shot, and Montenegro’s Danijel Furtula, who won the discus with 63.85m. 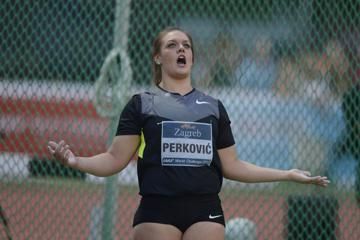