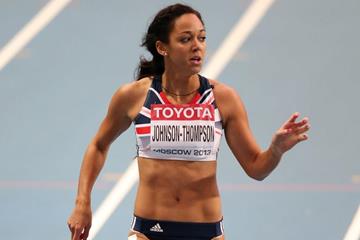 The women’s Heptathlon went almost exactly as planned in the last event of day one, the 200m.

Most of the top athletes matched their earlier performances and Ukraine’s Hanna Melnychenko is still in the lead after four events. She ran the 200m in 23.87, just 0.02 outside her personal best from earlier this season.

The 30-year-old, who placed sixth at the 2009 World Championships in Berlin, leads with 3912 points after the 200m and has a good chance for the gold medal during day two.

She is now 72 points ahead of Sharon Day, who clocked 24.28 in the 200m and is in third place with 3836 points. The US champion is a much better javelin thrower and with both athletes quite equal in the 800m, Melnychenko has to gain more points and put around 30cm in the Long Jump between herself and Day.

The star of the 200m, as predicted, was Dafne Schippers, who strolled to 22.84 season’s best 200m win, the fastest time in a World Championships Heptathlon. The previous best was a wind-assisted 22.92 by USA’s Sheila Burrell from Edmonton 2001 while compatriot Jackie Joyner-Kersee held the best wind-legal result with 22.95 in Rome 1987. Sweden’s Carolina Kluft is the only other athlete to break 23 seconds in a World Championships Heptathlon with her 22.98 from Paris 2003.

With this run, Schippers made up a lot of ground following her disappointing Shot Put and is in second place with 3837 points. The 21-year-old will need to significantly improve her 40.41m personal best in the Javelin to hold on to a medal position during day two.

Canada’s Brianne Theisen Eaton is in fourth place following a good 24.18 run in the 200m. With 3810 points at this stage, she is still very much in medal contention before day two.

Eliska Klucinova of the Czech Republic is fifth with 3739 points and Briton Katarina Johnson-Thompson set a personal best of 23.37 in the 200m and has 3739 points for sixth place.

After a good result in the Shot, Frenchwoman Antoinette Nana Djimou disappointed slightly in the 200m with 24.95. In eighth place German Claudia Rath ran 24.27 in the fourth event of the day and has 3733 points. She is an excellent long jumper and 800m runner and although she might struggle with the Javelin, she has a chance to fight for the medals here.

Belgian junior Nafissatou Thiam had her first disappointment of the day, running just 25.61 in the 200m to drop to ninth place with 3699 points. Pre-competition medal favourites Karolina Tyminska of Poland and Julia Machtig of Germany are almost certainly out of the medals race.