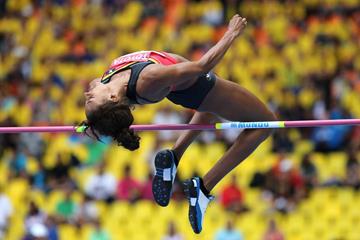 The women’s Heptathlon really heated up during the High Jump with some favourites dropping downwards in points and some surprising names coming up towards the top.

In another world-class Heptathlon High Jump competition, Belgian junior athlete Nafissatou Thiam cleared a 1.92m personal best and an equal world junior leader 2013. The 18-year-old also equalled the best result by a junior athlete in a Heptathlon, a mark held by one Carolina Kluft, the Swedish star having jumped 1.92m at the World Junior Championships in Kingston 2002.

Thiam is now looking at a potential top-eight finish at her first senior major championships and has her sights on her own Belgian record of 6292. She is in third place at the moment with 2092, but will need some other athletes to falter if she is to win a medal.

Dutchwoman Nadine Broersen, whose stumble in the 100m Hurdles ruined her medal chances, bounced back excellently in the High Jump. The 23-year-old has twice this year broken the Dutch High jump record, which had stood for almost 23 years; in May she cleared 1.89m, then bettered that with 1.90m in June.

Here she flew over 1.89m and made at least one very decent try at a national record height of 1.92m, but it wasn’t to be. Broersen still has a chance for a top-eight finish here, despite a devastating hurdles race.

There were also significant changes at the top of the Heptathlon standings. Ukrainian Hanna Melnychenko, the European indoor bronze medallist, took control of the event equalling her PB with a 1.86m clearance, cheered on by a vocal Ukrainian contingent in the stadium. The last time she cleared that height was back in 2007.

While the Ukrainian did well, the US favourite in this event, Sharon Day, was in trouble. The 28-year-old did well in the hurdles, but Day, competing for the first time in a position where she is the favourite to win, did not get anywhere near her 1.90m season’s best in the High Jump.

Even her first-time clearance at 1.80m was far from convincing and she then needed three attempts to clear 1.83m. Day is now in fifth place with 2065 and still tipped for a medal, but has to gain some points in the next events to make that happen.

In second place after two events is Canadian Brianne Theisen Eaton, who had a good 1.83m jump, just two centimetres off her season’s best and three centimetres from her personal best. The 24-year-old, who has won five NCAA combined events titles for the University of Oregon, has 2115 points at this stage and has a medal well within her grasp.

Briton Katarina Johnson-Thompson is fourth with 2068 following a solid 1.83m in the High Jump, but she was clearly not happy to miss three times at 1.86m and would have needed the points to finish in the top eight.

In sixth place is German Claudia Rath, who quite surprisingly seems to be the best heptathlete of her country. With a 6317 personal best this season, the 27-year-old seemed to be a bit too far from the medals, but a 1.83m High Jump personal best has changed that and she now has 2059 for sixth place; a medal here is a real possibility.

Just 18 years old, Cuba’s Yorgelis Rodriguez is in seventh place with 2049 following a 1.86m personal best in the High Jump, which Czech Republic’s Eliska Klucinova is in eighth with 2037. She too jumped 1.86m to equal her personal best.

The fastest sprinter of the competition who will be looking to break 23 seconds in the 200m later today, Dafne Schippers had a decent High Jump as well with a 1.77m clearance and could also get among the medals.

The athletes who now look to be out of medal contention include Antoinette Nana Djimou. The European champion cleared 1.77m, but that may not be enough to keep her in the hunt for medals. Another pre-competition favourite, Julia Machtig of Germany, continued to lose points in the High Jump with a clearance of just 1.71m.

Although Machtig is in 31st place now, it doesn’t mean she is totally out of it, as the 27-year-old can throw almost 16 metres in the Shot Put and is expected to move towards the top in the next event.