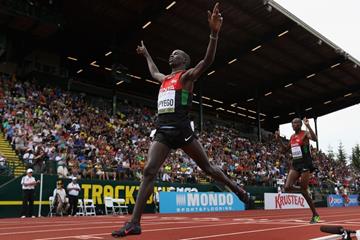 Barnabas Kipyego led home his Kenyan team-mate Titus Kipruto Kibiego for a double in the men’s 3000m steeplechase. Kipyego was clocked in 8:25.57; Kibiego crossed the line in 8:26.15.

Kipyego made the pace for much of the race, keeping the tempo from dawdling and leading the surges which trimmed the lead group down. He led through the initial kilometre split of 2:53.56; it was Kibiego’s turn to lead at the second split of 5:42.81.

The pack narrowed to the two Kenyans, world youth champion Meresa Kahsay of Ethiopia, and Bahrain’s Evans Rutto Chematot, but with two laps remaining Kahsay began to get left behind.

“With three laps to go I saw I was no longer with the Kenyans,” Chematot explained later, although he remained close up to the bell when Kibiego passed him for good.

It was Kipyego who took off on the last lap, with Kibiego shadowing him but unable to get ahead.

Kipyego stepped smoothly over the last water jump, which Kibiego hurdled a little ineptly, slowing him down a bit. Kipyego got over the final barrier more smoothly, giving him a slight advantage he held to the finish.

“Leading from the start to the end is what we had planned,” Kipyego explained. “This event is for Kenyans.”