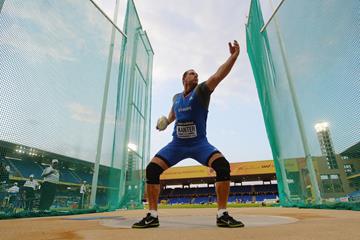 He may be one of older throwers on the international circuit, but Gerd Kanter proved today that sometimes he’s still the best.

The 35-year-old former world and Olympic champion won his first ever Continental Cup to give Europe eight points in an event that’s only once been won by a non-European.

Kanter led from the start and improved in round two before finishing with his best of 64.46m, albeit the shortest winning distance in the history of this event.

On paper, his Europe team-mate Robert Urbanek should have been his closest challenger, but the Pole had a day to forget, finishing back in sixth place with 60.27m, some five metres short of his season’s best.

Cuba’s former Pan-American champion Jorge Fernandez and Jamaica’s Jason Morgan stepped into the breach to take second and third for the Americas, picking up 13 unexpected and valuable points.

Morgan trailed Kanter with 62.70m and looked to have second sewn up until Fernandez came to life with the very last throw of the competition, his 62.97m moving him up from fifth.

Kanter led by 22cm from Morgan after round one with 62.91m, and extended his advantage with 63.86m in the second.

South Africa’s two-time African champion Victor Hogan was third at half way, just one centimetre behind Morgan, but he couldn’t improve and ended with two fouls to finish fourth overall, one place ahead of Australia’s Benn Harradine who was second four years ago in the Croatian city of Split.