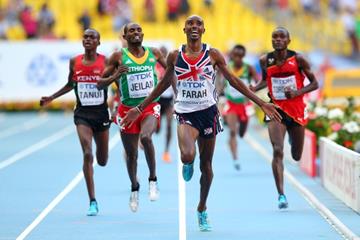 Just like at the IAAF World Championships in Daegu two years ago, this event  boiled down to a last-lap battle between Great Britain’s Mo Farah and Ethiopia’s Ibrahim Jeilan, but this time the roles were reversed.

In 2011, Jeilan had enough speed to be able to run a 52.8 final 400m for victory and thwart the man who was to win the 5000m in Daegu and then go on to take double gold at the London 2012 Olympic Games last summer, but Farah this time produced a 54.5 last lap in hot and humid conditions.

With the thermometer reading 27 degrees Celsius, Farah was able to move away his surprising challenger, who had not completed a 10,000m in almost two years and who has only recently returned to form after missing the Olympic Games through injury and having some rather modest results this summer.

Farah, like Jeilan a sparing racer over the longest distance on the track and running in his first 10,000m race since his London triumph, crossed the line in a Russian all-comers' record of 27:21.71. He become the first European to win over the distance at the World Championships since Italy’s Alberto Cova at the inaugural edition of the championships 30 years ago in 1983.

The race started off in familiar fashion to recent major championships over 25 laps of the track as the Kenyan trio and Ethiopian quartet featured prominently at the front of the race. But they didn’t grasp their opportunity to work together as a team and make the pace quicker, which might have made Farah’s task a little more difficult.

Paul Tanui was at the head of the field at the halfway point, which was reached in a modest 13:49.95, fractionally quicker than the 13:52.51 halfway split in Daegu but still very sedentary for runners of the calibre of Farah and his African rivals and unlikely to be the cause of any concern to the British star.

With three laps to go, 14 men were still potentially in medal contention, but USA’s Dathan Ritzenhein – a training partner of Farah – moved to the front with 1000m to go and there was a sudden sharp increase in pace.

However, there were seven men left in in the leading pack as the bell was rang. Farah, who had astutely kept his eye on all the action at the front but stayed in the pack during the first three-quarters of the race before moving to the front with just under 800m to go, then went through the gears and shook off all his challengers.

“I'm very excited, I won the medal that was missing," he said. "In 2011 in Daegu I was second...just. And today I won... just. It's interesting for the spectators, so it's great for the sport. I'm happy that I've won the first gold for my team here in Moscow. I've put a lot of work into it. I've been away from my family a lot, so that even my twin daughters don't recognise me, they think I'm a stranger."

Jeilan was slightly caught out of position at the bell and lying back in fourth, and had to come the long way around to get on Farah’s shoulder briefly as they entered the bend for the final time, but this almost certainly had no bearing on the final outcome of the race.

Jeilan came through the line in 27:22.23 as Farah had the luxury of being able to ease up over the final few metres and stretch his arms out wide in exultant celebration.

“I'm happy with my silver medal. My preparation for the World Championships was the same as two years ago, but with two weeks to go until the race I got ill and had to miss three days of training, basically two main training sessions. I believe that's why I lost gold,” commented Jeilan.

Japan-based Tanui, who had regularly made the pace during the first 9000m, came through strongly down the home straight to take the bronze medal to add to the silver he won at the 2011 IAAF World Cross Country Championships, crossing the line in 27:22.61, leaving 2012 Olympic Games silver medallist Galen Rupp having to settle for fourth place on this occasion.