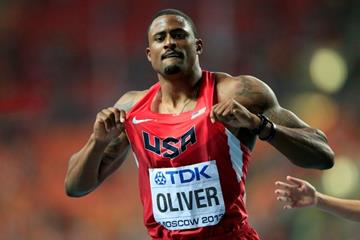 If at first you don’t succeed then try and try again... that should be the mantra of David Oliver, who after years of major championship frustration finally delivered his first major title at the age of 31.

The big-shouldered American simply obliterated the field to win the final in a world-leading mark of 13.00 – and struck gold with the biggest victory margin of 0.13 in the history of this event at a World Championships.

Behind, US champion Ryan Wilson – another member of the ‘thirty something brigade’ – stopped the clock in 13.13 to earn his first major championship medal with silver following a lengthy and distinguished career on the international circuit.

In bronze Sergey Shubenkov (13.24) delighted the home fans to claim Russia’s first ever medal in this event at a World Championships. Rich reward for a great overall competition by the European champion in which he has impressed through all three rounds.

Oliver, who has adopted a new approach last winter which saw him ditch weight training and take a day off every Wednesday to help keep his body fresh, said of his gold medal: “This victory means the world to me. It feels so great to finally put this thing (a gold medal) around my neck. I think the race was great. When you cross the line first it means the race was great for you.”

Wilson, the silver medallist, has for many seasons struggled to find a sponsor despite turning in world-class performances and tonight he believes he delivered because a lucky charm was present in Moscow.

“I always run great when my mum is in the house,” he explains. “So, I gave my mum a hug – she is here in the stadium. I’m so happy and so excited.”

For Shubenkov, who secured the bottom rung on the medal podium, running in the final was all about racing with an uncluttered mind.

“In the rounds I was trying to focus on my technique to control myself and my rivals,” he explains. “In the final it was just: RUN. To compete with the home crowds in a home stadium is just amazing.”

Oliver, the fourth-fastest 110m hurdler in the history of the event, looked a little edgy at the start knowing that despite running a whole series of sub-13 second times in his career he has all too often failed to deliver when it counts – an Olympic bronze at the 2008 Beijing Games his sole outdoor global medal.

By contrast Jason Richardson, the defending champion, looked composed, calmly raising a finger to his lips to tell the crowd to be quiet at the start.

Oliver, who in the heats recorded the fastest ever non-final time in this event at a World Championships, looked less convincing in the semi-finals earlier this evening. However, when it mattered most he made a blistering start and held a slight lead from Andrew Riley of Jamaica at the first hurdle.

As the race unravelled it was the giant Florida-based hurdler who began to control the race with Wilson running in the outside lane nine and Richardson to the fore.

Oliver, who formerly had a reputation for being an athlete prone to smashing through rather than over the hurdles, was this time running a clean race and appeared to extend his advantage over each barrier.

Merritt, the Olympic champion, was also in medal contention at the mid-race stage but after heavily striking hurdles seven and eight he quickly dropped out of podium contention his dreams of adding the world title shattered.

Coming off the final hurdle, Oliver held a clear lead and as he crossed the line he let out a triumphant scream of joy. Meanwhile, Wilson kept his composure to grab a well-earned silver medal.

Richardson messed up his chances of bronze by clipping the final hurdle and losing vital momentum and so letting the door ajar for Shubenkov to grab bronze.

The US athlete was 0.03 back in fourth with William Sharman in fifth (13.30). The British athlete boasts a proud World Championship record having finished fourth and equal fifth at the previous editions. Merritt, who tore a hamstring in May and has looked some way short of his best this season, was sixth (13.31).