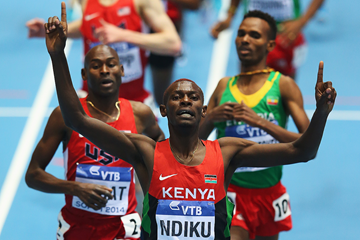 So now we know why Caleb Ndiku kept his woolly hat on en route to victory in his first-round heat. The Kenyan lined up for the final sporting flaming dyed red hair.

It was not the first shock he was to unveil, as championship pedigree lay elsewhere on the start line.

When it came to the crunch, however, it was Ndiku who had the tactical nous and the speed endurance to claim the gold.

While fellow Kenyan Augustine Choge led through 1000m in a dawdling 2:48.83, New Zealand’s Zane Robertson went through 2000m in 5:32.36, and Gebrhiwet flitted in and out of pole position, Ndiku bided his time in the middle of the pack.

He made his move with 500 metres to go, hitting the front and putting the hammer down.

Gebremeskel and Rupp tried to close him down. So too did Lagat, but with his long, raking stride, Ndiku proved uncatchable.

Gritting his teeth down the home straight, the outsider won by a stride in 7:54.94.

Lagat took silver in 7:55.22 and Gebremeskel the bronze in 7:55.84, with Rupp in fourth and Gebrhiwet a dispirited fifth.