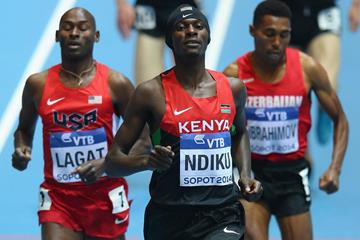 You have to take your hat off to Caleb Ndiku, which is more than the Kenyan did himself when it came to the crunch in the second of the two first-round heats.

With two laps to go, the 21-year-old former world junior 1500m champion hit the front, sporting a black woollen hat, and resisted all attempts to dislodge him.

Ndiku did not quite take off in the style of Dave Wottle, the US “Wottle the throttle” who famously sped to Olympic 800m gold in Munich in 1972 resplendent in a golf cap.

Still, crossing the line a winner in 7:42.75, Ndiku claimed the nominal preliminary-round scalps of two of the heavyweights of the event.

Not that Ethiopia’s Hagos Gebrhiwet, the world 5000m silver medallist, or Bernard Lagat, the three-time winner representing the USA, were particularly busting a gut to score any first-round psychological points.

They were happy enough to ease through to the final in Ndiku’s slipstream, Gebrhiwet finishing second in 7:42.95 and Lagat third in 7:42.98.

There was another Kenyan winner in the opening heat, the former Commonwealth Games 5000m champion Augustine Choge kicking to victory in 7:44.85, ahead of Ethiopia’s Dejen Gebrmeskel, USA’s Galen Rupp and Great Britain’s Andy Vernon, the latter posting a lifetime best of 7:45.49 in fourth place.