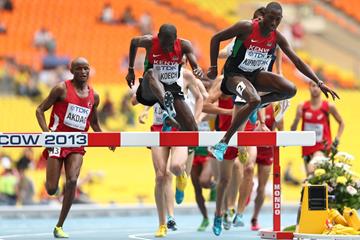 With the exception of possibly the Ethiopian record-holder Roba Gari, all of the chief protagonists eased into Thursday’s final.

On a much cooler day with heavy cloud cover, there was little margin for error with only the first three from each heat automatically qualifying, plus the six next fastest advancing.

In the opening heat, Ugandan record-holder Benjamin Kiplagat set a healthy pace from the gun and held a 10-metre lead going through 1000m in 2:44.64.

With three laps to go, Kiplagat retained a 10-metre lead and a pack of four chasing pursuers had formed behind, led by Kiprop, Mekhissi-Benabbad, Spain’s Angel Mullera and Canada’s surprise package Matthew Hughes.

Mullera took his turn at the front down the back stretch on the penultimate lap before Hughes made an unexpected attack and opened up a five-metre lead at the bell.

Predictably, Mekhissi-Benabbad hunted down the Canadian champion and purposefully powered down the home stretch to take the heat win in 8:15.43. Hughes was rewarded with a personal best – by more than three-and-a-half seconds – for second in 8:16.93.

Mutai faded in the latter stages, but did enough to secure third in 8:19.15. Also qualifying from this heat as next fastest qualifiers were Mullera, Ion Luchianov of Moldova and Kiplagat, the long-time leader.

There were no major dramas in a largely featureless heat two, which only began to be shaken out of its lethargy in the final two laps. For a large chunk of the first two thirds of the race it was Ugandan Jacob Araptany who led the field, but the pace was not sufficiently quick enough to do any real damage.

With two laps remaining, Araptany finally made a significant move, stretching the field and taking Kemboi, Noureddine Smail of France, US record-holder Evan Jager and Alex Genest of Canada with him.

It was the same five at the bell chasing the three automatic spots, when Kemboi came to the fore down the back straight. He accelerated to the head of affairs taking Jager with him.

There was a minor scare for third-placed Smail, who stumbled on landing at the final barrier but he crucially kept his balance to secure the third and final automatic qualifying spot.

Ahead, Kemboi, who led off the final barrier, eased back off the throttle in the final few strides, allowing Jager to take the heat win in 8:23.76.

Long-time leader Araptany took fourth which, along with Genest in fifth was good enough to see them advance. Genest was initially disqualified for stepping between the cones on the top bend, but was later reinstated.

There was disappointment, however, for Gari, the fourth-place finisher at the 2012 Olympic Games. The Ethiopian dropped out of contention quickly, finishing ninth in 8:45.06.

The third heat witnessed few surprises as Kenyan led home a 1-2 to ensure a full presence in the final. Kipruto led for much of the race but with no particular urgency and most of the field were still bunched together passing 2000m in 5:39.97.

At the bell, thanks to a more sustained effort by Kipruto, who runs with a distinct forward lean, the lead pack had reduced to just five. Following his every move was his compatriot Koech, Yoann Kowal of France, Morocco’s Hamid Ezzine and Poland’s Krystian Zalewski.

Down the back straight the Kenyan pair cruised away from the rest of the field and it was the teenager Kipruto, who took the heat win in 8:22.31, just over half a second clear of Koech.

Kowal secured the third automatic spot to ensure a full complement of three French athletes in Thursday’s final. Ezzine in fourth (8:24.35) advanced as one of the six fastest losers.