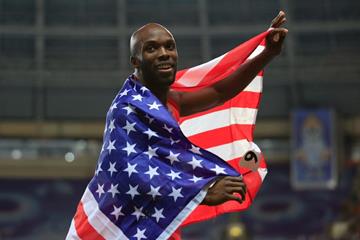 All season the men’s 400m had loomed as a two-man race: Kirani James vs LaShawn Merritt.

After Monday night’s semi-finals, we saw other possibilities. Yousef Ahmed Masrahi thrust himself into contention with a Saudi Arabian record in one semi. World junior champion and Olympic silver medallist Luguelin Santos charged home to almost beat James in another.

What we didn’t see coming was a one-man race. That’s what LaShawn Merritt turned the final into – blazing out hard, holding on strongly, blowing everyone else away.

When it was over, Merritt had won in 43.74, a personal best, to add a third global title to his Beijing Olympic and Berlin World titles. His winning margin over team-mate Tony McQuay was 0.66 seconds. Only Michael Johnson – when he set his World record of 43.18 in Seville in 1999 and beat Sanderlei Parrela by 1.11, and in beating Butch Reynolds by 0.83 in Gothenburg four years earlier – has won a men’s World Championships 400m final by bigger margins.

Santos showed his form in the semis was no mirage, taking the bronze in 44.52. Again he came home hard, but he was like a man chasing a bus he has no hope of catching.

Jonathan Borlee missed the bronze medal by just two hundredths of a second, finishing fourth in 44.54 while James faded from what appeared a challenging position as they entered the final straight to seventh place in 44.99.

Masrahi, who had looked so threatening in the semi-finals, was one place higher in 44.97.

James must have thought he had a favourable draw when he went to his blocks in lane five with Merritt one to his outside. He could key off his strongest rival and then use his biggest strength – his strength – down the final straight.

That’s the way it looked as if it would play out through the first 200m and round the bend. Merritt had clearly started fast, going through Santos in lane seven half-way down the back straight. But James was tracking him and looked comfortable enough.

Merritt thundered on to the bend; still James was there. As they straightened, perhaps the gap was a metre too wide for comfort, but hadn’t James out-run Merritt down the final straight in Daegu two years ago to win his first World Championships gold medal, 44.60 to 44.63?

But it quickly became apparent there was nothing in James’ tank. As he faded 70 metres from the line, McQuay, Santos and Borlee flashed past to fight out the minor medals. There was no catching Merritt now.

Pavel Maslak and Masrahi also pushed past the spent James in the final metres.

The winner broke 44 seconds, the next six were under 45, while eighth and last went to Brazil’s Anderson Henriques, who reduced his previous best in two slices to 44.95 here in the semi-finals, but could only find 45.03 in the final.

So for all but James, there was consolation here in either personal bests, season’s best or national records. For James, well, he has his World and Olympic titles and, at the tender age of 20, almost an athletic lifetime to bounce back. No doubt he will.

Those of us who thought it was going to be a two-horse race though – well LaShawn Merritt showed us all up for mugs.