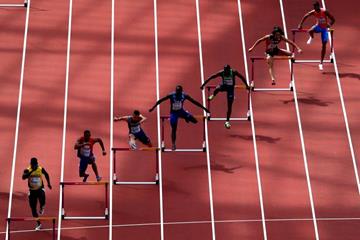 One of the more unpredictable events at this IAAF World Championships is the men’s 400m hurdles and that unpredictability was only increased following an incident-packed first round that saw two of the favourites to make the final disqualified and the rest of the contenders evenly matched across the five heats.

Indeed, less than a second separated Turkey’s Olympic bronze medalist Yasmani Copello, the fastest of the morning with 49.13, from 2014 European champion Kariem Hussein, who made the semi finals as the final qualifier on time with 50.12.

2016 Olympic champion Kerron Clement looked relaxed in the first race, opting to run hard for the first 200m before holding back once his position had been secured. The 31-year-old American, twice an individual world champion, crossed the line in 49.46 and appears to have timed his season perfectly following a slow start to the year.

Javier Culson, the silver medalist in 2009 and 2011 failed to progress however, fading after a strong first 300m to finish sixth.

The second heat was loaded with athletes with realistic ambitions of making Wednesday’s final, but 20-year-old Kyron McMaster, the fastest one lap hurdler in the world in 2017 with a 47.80 clocking back in May, found himself exiting the championships at the earliest stage.

He ran hard from the blocks but approached the first hurdle awkwardly and was subsequently disqualified as his lead leg went around rather than over the upright and forced him to step on the line.

It was TJ Holmes of the USA who had finished first in any case, making 49.35 look very straightforward, and he was joined by Jaheel Hyde of Jamaica, Abdelmalik Lahoulou of Algeria and Ireland’s Olympic fourth placer Thomas Barr.

The man who edged Barr for the bronze medal in Rio, Copello, took the third heat from lane seven, tracking Abderrahaman Samba of Qatar who was outside him, before easing past in the final metres. The pair, both of whom have recorded times among the best eight in the world this season, were comfortably ahead of France’s Ludvy Vaillant, who ran hard for third.

Switzerland’s Hussein slowed visibly in the last 50 metres, but just did enough to progress.

Norway’s European U23 champion Karsten Warholm is an improving athlete and is considered a medal prospect. He implored the crowd to get behind him when he was announced to the stadium prior to heat four and after slowly settling into his blocks, ran a swift 250m, chasing down Juander Santos, who was outside him.

Santos, the 22-year-old brother of Luguelin, the 2012 Olympic silver medalist over 400m, finished the stronger of the two however, to record 49.19, while Warholm looked around nervously as he tired.

Little did he know, but the USA’s Michael Stigler, who finished second, would be disqualified for failing to clear a hurdle with his trail leg, so Warhol took the second qualifying place in 49.50, just ahead of Guillermo Ruggeri, who set an Argentinian national record 49.69 in third.

In the final heat, the US champion Eric Futch was expected to qualify given that he had set 48.18 in taking his national title in June. He did progress, but only as a time qualifier thanks to a sixth place finish in what was the closest heat.

The win went to Mamadou Kasse Hann of France in 49.34, but that was less than a quarter of a second quicker than the American, who slowed visibly after a quick first half lap.

Hann and Futch sandwiched Brazil’s Marcio Teles, Poland’s Patryk Dobek, Kenya’s Aron Koech and, to the approval of the British supporters, Jack Green, who all qualified, too.