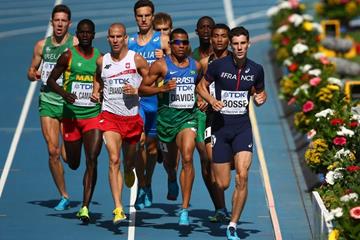 Ethiopia’s Mohammed Aman looked impressive and confirmed his status as the slight favourite for the men’s 800m with an assured outing in 1:44.93, the fastest time by far of the six heats in the morning’s first round, and also the third-fastest first-round heat in the history of the IAAF World Championships.

A fast time was inevitable after Burundi’s Antoine Gakeme, who had an apparent personal best of 1:52.81 and no form to speak of this season, ran an audacious and unexpected first lap in 50.71 to tow the field through the bell.

Gakeme led the field through to 550m before he started to tire but Aman had the measure of everyone, bursting clear of the four-man leading pack as they entered the home straight; from that point he was never headed.

Gakeme drifted back to fifth place but his courage was rewarded with a time of 1:46.70, taking more than six seconds off his previous best, the only man to go into new territory in the heats, and getting him a place in the semifinals.

The other heats were more in keeping with the norm at the championships.

France’s recently crowned European under-23 champion Pierre-Ambroise Bosse made qualifying look very easy in the first heat, leading at the bell and staying in front throughout the second lap before coming home in 1:47.70.

Poland’s 2010 European champion Marcin Lewandowski came through strongly down the home straight to secure his place in the semi-finals in second place with 1:47.83.

Uganda’s Ronald Musagala is a new name, but impressed in the second heat with a win in very similar fashion to Bosse in 1:46.12, which was not far from his best of 1:45.71.

Poland's Adam Kszczot and USA’s Brandon Johnson looked like they had to work slightly harder than they would have liked over the final 50 metres to secure their places in the semi-finals but eventually came through for second and third respectively behind Musagala.

Sadly, a non-starter in the second heat was Botswana’s Nijel Amos, stories of his recent injury sustained since he won the World University Games title last month being confirmed.

His absence means that none of the medallists from last summer's Olympic Games made it to Moscow.

The US pair of Duane Solomon and Nick Symmonds, fourth and fifth at the London 2012 Olympic Games, came home first in the next two heats.

Solomon looked comfortable winning in 1:45.80, the second-fastest heat win after Aman in heat five, but Symmonds had to battle with Qatar’s Museb Balla on the final lap, eventually crossing the line in 1:46.90, 0.04 in front of his Asian rival. Morocco’s Samir Jamaa came through in the final metres to finish third in the same time as Balla.

Heat six saw the pace led by Anthony Chemut, the most experienced of the Kenyan trio, but Djiboutian talent Ayanleh Souleiman came home strongly over the final 100m to win in 1:46.86.

Souleiman is one of the few men in the 800m field also doubling in the 1500m, and the only man with realistic medal chances in both events.

Most of the expected contenders went through to the Sunday’s semi-finals but there were a few notable casualties.

Kenya’s Jeremiah Mutia, a 2009 IAAF World Youth Championships silver medallist in the 400m Hurdles, ran out of stream badly down the home straight and could only finish seventh in heat four while Brazil’s two-time Pan American Games silver medallist Kleberson Davide also didn’t bring his best form to Moscow and finished fifth in heat one.