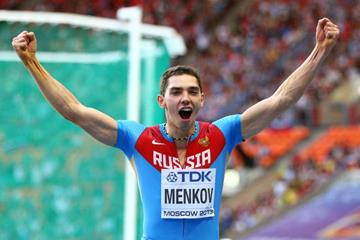 Aleksandr Menkov rose to the occasion and had three jumps farther than anyone else, topped by a Russian record of 8.56m, to take the Long Jump title in front of his family and friends.

Cheered on by an enthusiastic crowd and clearly motivated by the sight of his compatriot Tatyana Lysenko winning the women’s Hammer gold medal while the competition was underway, Menkov showed the high-level consistency that he had done all year.

Such consistency marked him out as the favourite for the gold medal, regardless of a surprising defeat at the World University Games last month when he finished second to Mexico’s Luis Rivera, despite jumping a personal best of 8.42m.

Germany’s 2010 European champion Christian Reif took an early lead when he went out to 8.18m in the first round with Menkov not that far behind, with 8.14m on his opening effort.Spain’s Eusebio Caceres then took over in pole position with 8.25m in round two.

However, Menkov then uncorked a Russian record of 8.52m in the third round, consigning to history the previous mark of 8.46m set by Leonid Voloshin back in 1988.

It was the perfect jump, with Menkov hitting the board with millimetres to spare before propelling himself into the air.

It effectively ended the contest for the gold medal but also proved to be the starting gun on what was to be an exciting and enthralling competition for the minor medals over the final three rounds. It was at this point of the competition when USA's Dwight Phillips, a four-time World champion in this event, exited the competition.

In the fourth round, Ignisious Gaisah set a Dutch record of 8.29m in his first competition in the famous Orange vest, after becoming eligible to compete for the Netherlands in June, and moved from fourth to second.

It was the best jump since 2006 by the former Ghanaian athlete, the year he won at the IAAF World Indoor Championships, African Championships and Commonwealth Games.

Now jumping last, Menkov launched himself out to 8.43m, still better than anyone else in the competition and farther than he had jumped before Friday evening.

In the fifth round, Rivera moved up to third place with 8.27m and Caceres improved by one centimetre to 8.26m before Menkov then produced what was to be his winning effort of 8.56m, the best jump in the world since 2009, to seal his win.

None of the main protagonists improved with their final efforts although Brazil’s Mauro da Silva had Gaisah and Rivera biting their nails as his last jump was measured. Although the World indoor champion saved his best til last, it was only 8.24m and he had to settle for fifth place.

With six men over 8.20m – Reif having gone out to 8.22m in the third round – it was the best ever World Championships competition for depth in legal conditions, arguably only surpassed by Helsinki 2005 which saw a spate of wind-assisted jumps.

At last year's Olympic Games, 8.12m was enough for a medal. In tonight's competition that would have only been good enough for seventh place.

Gaisah, who was mobbed by his new compatriots while Menkov made his way around the track on a deserved lap of honour, provided the Netherlands’ first medal at the World Championships since 2007.

Despite his pedigree, expectations that Gaisah would crown his debut for his new country with a place on the podium were low, especially as he had just scraped into the final in 12th and last place.

Rivera got his country’s first ever field event medal at the World Championships, nine out of the 12 of their previous medals having gone to race walkers.