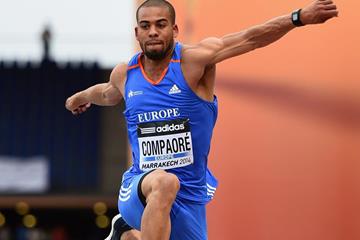 Will Claye went into the competition with IAAF Continental Cup points already on the board, having finished second to Ignisous Gaisah in the long jump on Saturday. The world bronze medallist also started as favourite in this discipline, as the only man in the field to have ventured beyond 17.50m this year.

Not that the 23-year-old US athlete was in anything like the shape that took him to his season’s best of 17.75m at the US Championships in Sacramento back in June. Indeed, Claye found himself eclipsed by a couple of record breakers in the shape of the rapidly emerging European champion Benjamin Compaore of France and South Africa’s Godfrey Khotso Mokoena.

Claye’s best of 17.21m, in the third round, was ultimately only good enough for third place.

Mokoena had taken the lead with 17.35m in the second round, a South African record, but the 2008 world indoor long jump champion soon found himself trumped in the same round.

Having opened with 17.26m, Compaore improved to 17.48m, a two-centimetre improvement on the lifetime best that earned him European Championships gold in Zurich last month and the winning distance on Sunday.

It was also an African all-comers’ record, bettering the 17.42m jumped by Germany’s Charles Friedeck of Germany at the 1998 World Cup in Johannesburg.