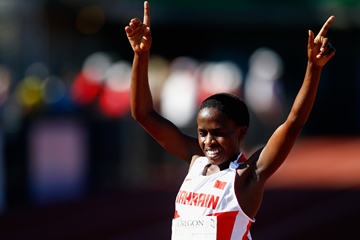 Jebet simply ran away from the field over the last kilometre of the race to win Bahrain’s first ever IAAF World Junior Championships gold medal, and their first women’s medal of any hue.

After early pace making by Peru’s Zulema Arenas brought the pack through the first 1000m in a quick 3:12.16, Kenya’s world youth champion Rosefline Chepngetich took over and began surging in an attempt to break up the pack.

Jebet moved up before the second kilometre, reached in 6:26.18, and towed Chepgnetich and her team-mate Daisy Jepkemei, the defending world junior champion,  away from the pack.

Eventually Jebet opened a sizeable gap the Kenyan duo was unable to close. Chepgnetich set out in pursuit but was unable to approach Jebet until the final lap, and by then it was too late and she took silver in 9:40.28.

Jepkemei duelled with Ethiopia’s Buzuayehu Mohamed for the bronze medal through the last lap, ultimately pulling away to give Kenya two women on the podium with a 9:47.65. Mohamed was fourth in 9:48.66.