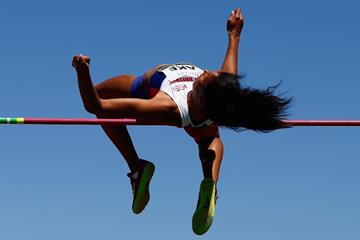 Great Britain’s Morgan Lake made good on her second shot at world junior gold, clearing 1.93m to secure the victory and a second title four days after her heptathlon triumph on Wednesday.

Of the four women who attempted 1.91m, Lake and the Czech Republic’s Michaela Hruba were the only ones to clear it, Lake on her first attempt and Hruba on her third. It was a Czech junior record for 16-year-old Hruba.

Lake, whose heptathlon high jump clearance was 1.94m, went on to make three attempts at 1.97m, which would have been a national senior record had she achieved it.

Bronze went to Russia’s Irina Ilieva at 1.88m. Rachel McCoy of the USA also cleared 1.88m but had one more miss at 1.85m, so she finished fourth behind Ilieva.

While Lake was the first and only double gold medallist in individual events, long jump winner Akela Jones of Barbados was also entered, but opted not to jump at the last minute.