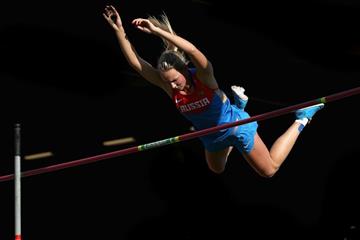 Alena Lutkovskaya won one of two gold medals for Russia on Thursday (24) at the IAAF World Junior Championships, Oregon 2014 when she prevailed in the most competitive women’s pole vault ever contested in the 28-year history of the event.

The European junior champion equalled the championship record of 4.50m, set by Sweden’s Angelica Bengtsson in Barcelona 2012. It was also a personal best for the world youth silver medallist.

Desiree Freier improved her US junior record with 4.45m on her 18th birthday and in the process won her country’s first medal in the women’s pole vault in the history of the championships.

Australia’s Nina Kennedy also improved her personal best to 4.40m, but it was not sufficient to win a medal today. At any previous editions of the championships, it would have been enough for at least a silver.

Lutkovskaya opened her competition at 4.20m and after one miss at 4.35m, she cleared that height and went over 4.45m on her first try and then a personal best of 4.50m in her second one. After a failed attempt at 4.57m, she ended the competition.

The 18-year-old joined world record-holder Yelena Isinbayeva, winner in 2000, and Valeriya Volik, gold medallist in 2008, as the third female Russian athlete to top the pole vault at the World Junior Championships.