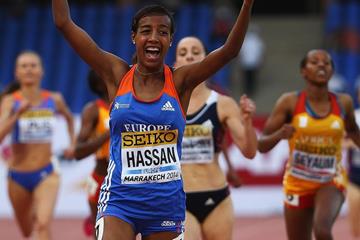 Hassan, the European champion from the Netherlands, won by more than a second in 4:05.99 after taking command of the race from the 800m point. After becoming the youngest ever winner of the women's 1500m at this competition, she didn’t hide her delight as she crossed the line, arms held high, smiling widely.

Poland’s Renata Plis and USA’s Shannon Rowbury controlled the pace through the opening two laps, bring the field through 800m in a sluggish 2:18.26 that played nicely into Hassan’s hands.

Moving up in familiar fashion from near the back of the pack, Hassan quickly assumed the lead, with only the Ethiopian teenager Seyaum, this year’s world junior champion, giving chase.

Hassan looked confident as she passed the bell, upping the pace but not yet shaking off the young challenger, who even took the lead with about half a lap to go.

But Seyaum’s experiment with front-running was short-lived.

Hassan retook control for good as she entered the final straight, with Seyaum beginning to fade.