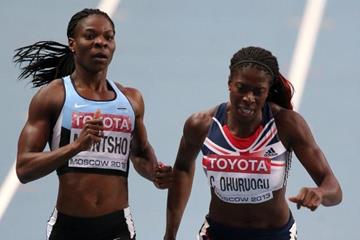 History has taught us never to discount Christine Ohuruogu but boy did she leave it late, very late, to regain the World 400m title she last won in Osaka six years ago.

In five previous battles this season the Briton had lost four of those encounters with Amantle Montsho. Yet in a quite spectacular final, which will linger long in the memory, the Briton stormed down the home stretch to catch Montsho, the defending champion, with a sucker-punch on the line to win by just four thousandths of a second.

Both registered times of 49.41 – a national record for the British athlete, who was aged just three months when Kathy Cook had set the former mark of 49.43 when winning bronze at the 1984 Los Angeles Games.

For the Botswanan it was the bitter taste of defeat and the surrender of her World title by the slimmest of margins.

Fast-finishing Antonina Krivoshapka, much to the approval of the home Russian fans, emerged from the pack to win bronze in 49.78 and match her performance at the 2009 Berlin World Championships.

If some finals don't live up to hype, this one certainly does and few could see past either Montsho or Ohuruogu in the scrap for gold. Both have looked majestic through the rounds with the African the slightly quicker of the pair in the semi-finals and probably the marginal favourite.

Nonetheless, the Londoner would have been delighted with being drawn one lane inside of her chief rival.

On a slightly cooler, less humid evening than the previous two nights, it was US champion Natasha Hastings who set the early pace, catching up the stagger on the eventual gold medallist after just 100m.

Leading down the back straight it was Hastings followed by her countrywoman Francena McCorory.  In characteristic fashion Ohuruogu was some way down but her fans would be refusing to panic, knowing she still had to play her joker hand.

Rounding the final bend Hastings started to fade while Montsho, with her familiar upright style, began to seize control.

Yet this was not over yet. Even with Ohuruogu at least four metres down rounding into the home straight she is the most redoubtable of athletes. A 400m slugger who revels in the intensity of championship competition. An athlete who never knows when she is beaten.

With 50 metres remaining it still appeared Montsho's race for the taking. Then, almost imperceptible, the Briton started to close on the African as if reeling in a fish on a rod.

With five metres to go it still appeared the Botswanan was about to emulate Cathy Freeman as a back-to-back winner of this title. Yet somehow Ohuruogu timed her dip finish to perfection while Montsho, mystifyingly, failed to lean.

As both athletes flashed across the line it was very hard for the naked eye to determine a winner. Both athletes stood hands on hips sucking in the air, unaware of the outcome. They gave each other a friendly shake of the hand then after a wait of around 45 seconds up it popped on the big screen. Christine Ohuruogu gold with 49.41 – a national record mark.

Montsho had also registered the same time – the second-fastest of her career – but that mattered little. It was Ohuruogu's race.

Behind, Krivoshapka – the World No.2 athlete coming into the championships – earned the reward of a second World 400m bronze.

Stephanie McPherson of Jamaica, running in lane three, capped a breakthrough season by finishing fourth in 49.99. The early leader Hastings wound up fifth in 50.30, perhaps now regretting her tactical approach.

McCorory, who set a personal best of 49.86 in the semi-finals, will have been disappointed with her display in the final as she finished sixth in 50.68.