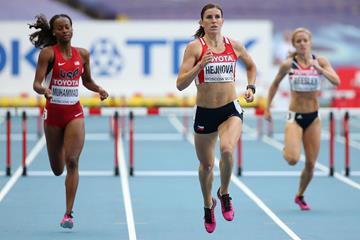 When the athletes on the start line for women’s 400m Hurdles semi-finals were announced to the crowd, one of them drew a significantly bigger reaction than any other – Natalya Antyukh of Russia.

But the Olympic champion and 2011 World bronze medallist will take no part in the final after finishing just sixth in the second of two semi-finals.

That proved to be the only surprise of the round as both races went very much to the form book.

In winning the first semi-final, World leader Zuzana Hejnova gave just a hint of what to expect in the final. As is fast becoming her trademark, the Czech record-holder moved up a gear in the last 150m to pull well clear of the field; her winning margin so big that she could afford to ease down before the finish, clocking 53.52.

US champion Dalilah Muhammad crossed the line in second place in 54.08, the second-fastest time of her career, to sail into her first World Championships final. Britain’s Eilidh Child similarly produced the second-best performance of her life to also make her first World final, running 54.32.

Behind the three automatic qualifiers, three other women dipped below 55 seconds but only two of them advanced on time. Ukraine’s Anna Yaroshchuk pipped Nickiesha Wilson on the line, 54.92 to 54.94, with both of them grabbing the two non-automatic qualifying spots.

Britain’s Meghan Beesley, the 2008 World junior bronze medallist, smashed her PB with 54.97 but just missed out on a place in the final.

The second semi-final played out similar to the first in that the heavily favoured athlete was the sole woman to break 54 seconds. This time it was Britain’s Perri-Shakes Drayton, the second-fastest entrant at the championships, who crossed the line in first.

Up until the final 40 metres, defending champion Lashinda Demus was leading, having gone out hard. She faded slightly at the end as Shakes-Drayton glided past her, stopping the clock in 53.92. The US record-holder was rewarded with a season’s best of 54.22 to guarantee her place in the final.

It meant that both USA and Britain will have two athletes each in the final. So too will Ukraine as Yaroshchuk’s team-mate Anna Titimets grabbed the third automatic spot in a personal best of 54.68.

In much the same way that the heats gave little away, the 400m Hurdles semi-finals similarly told us nothing new. Hejnova still appears to be the favourite with Shakes-Drayton the most likely challenger, but Demus will not surrender her title without a fight.