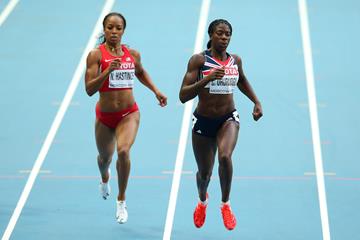 If the first-round heats shaped a likely head-to-head showdown between Christine Ohuruogu and Amantle Montsho, then the semi-finals crystallised that belief.

Montsho, bidding to emulate Australian one-lap legend Cathy Freeman as a back-to-back winner of this title, looked imperious in the opening semi-final, registering the second fastest time in the world this year.

In the second semi-final, Ohuruogu also looked in fine fettle. The Briton took the heat win in a season’s best 49.75 and she too looks in the mood to mount a serious assault on the title she won in Osaka six years ago. It should be some showdown.

On a muggy evening inside the Luzhniki Stadium, it was Jamaica's Patricia Hall, running blind in lane eight, who figured prominently in the first half of the opening semi-final.  Yet with typical calmness, Montsho of Botswana responded to the challenge and in the third 100m established control of proceedings. Entering the home straight, she held a two-metre lead from Kseniya Rzyhova, who was predictably being roared on by her home crowd.

Yet those who have watched Montsho perform on the Diamond League circuit this season would not have been surprised by the majestic nature of her final 100m as she serenely moved clear of her Russian rival to stop the clock in 49.56 – the second-fastest time in the world this year and equal to her winning time in the Daegu 400m final two years ago.

Note, the owner of the fastest time in the world this year is Montsho, who ran a national record of 49.33 in Monaco last month.

Rzyhova, who had worked very hard around the final bend, faded in the latter stages, but a time of 50.48 was still good enough to secure the second automatic spot to the elation of the vociferous Russian support.

Nigeria's Regina George set a personal best of 50.84 from lane six to take third but she will take no part in the final.

Hall, who had led from the outside lane at half way, paid the price for her exuberance and wilted down the home straight, winding up eighth.

Running in heat two, Ohuruogu ran a markedly very different tactical race to Montsho, but she too hinted at her gold medal-winning potential.

Once again, it was the athlete running in the outside lane eight, Kineke Alexander of St Vincent & the Grenadines, who figured prominently in the early stages. Natasha Hastings, the US champion, was also closing down the stagger on Novlene Williams-Mills while Ohuruogu was some way back.

Entering the home straight it was Hastings by a metre from Williams-Mills with Ohuruogu some five metres in arrears. Yet refusing to panic and drawing upon her formidable strength, the Briton powered down the home straight to pick off the two athletes ahead of her and claim the heat win in 49.75. It was the fourth-fastest performance of her career and her fastest ever clocking in a championships semi-final.

As a measure of the quality of the semi-final, Hastings matched her season's best time of 49.94 set at the US Championships this year. Williams-Mills was rewarded with a place in the final as one on the two fastest losers with 50.34.

A year after she was diagnosed with breast cancer, the Jamaicans presence in the final is a heart-warming story. Another performance of note was delivered by Libania Grenot of Italy, who set a season's best time of 50.47 for fourth.

The third semi-final also witnessed fireworks as Francena McCorory, the fourth-place finisher at the 2011 World Championships, trimmed 0.10 from her lifetime best to take the heat win in 49.86.

Ukraine's Nataliia Pygyda, with her familiar wide arm action, was prominent in the early stages with Jamaica's Stephanie McPherson also showing well. At halfway it was McPherson who held a significant lead with McCorory and Antonina Krivoshapka of Russia in nearest pursuit.

The order remained unchanged as they headed for the final 100m, but McCorory revealed her new-found strength to power past McPherson with a perfectly timed run. In a tight battle for second, Krivoshapka was awarded the final automatic qualifying spot in a photo-finish – both recorded 49.99 – from McPherson. The Jamaican will also take her place in tomorrow afternoon's final as a non-automatic qualifier. All three qualifiers from heat three should also be marked out as genuine medal contenders

Yet for many, the race for gold is between Montsho and Ohuruogu.