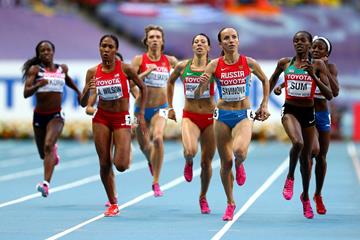 USA’s Alysia Johnson Montano, the second-fastest runner this season of those present in Moscow, was the gun-to-tape winner of the first semi-final, winning in a fast time of 1:58.92 and naturally pulling the two time qualifiers to the final from her heat.

She won in 1:58.92 with compatriot Brenda Martinez close behind in 1:59.03 and Lupu grabbing the third automatic qualifying spot in 1:59.43. Russian Ekaterina Poistogova in fourth in 1:59.48 and Lenka Masna of Czech Republic in fifth in 1:59.56 also qualified by time, but Hachlaf, who was close to the leader for a long time, faded to sixth in 2:00.55, missing the final.

The second heat started more conservatively with Belarusian Marina Arzamasova leading the runners through 400m in 60.49. In this heat it was clear that a place in the top three was needed because of the slower place and the final sprint was fierce.

Kenyan Eunice Jepkoech Sum, who clocked 1:30.75 at 600m, kept her lead until the finish line to win in 2:00.70 ahead of Russia’s Olympic champion Mariya Savinova, who also qualified relatively easily in second place in 2:00.73.

Cuban Rose Mary Almanza didn’t make the final in fourth place in 2:00.98 and early leader Arzamasova was fifth in 2:01.19 while the third Russian, Yelena Kotulskaya, went out in 2:01.75.

Briton Marilyn Okoro was seventh in 2:02.26, while Malika Akkaoui, the fastest entrant for Moscow, was eighth in 2:02.29, four-and-a-half seconds adrift of her PB.

The favourites in the final will be US duo Johnson Montano and Martinez, along with, of course, the reigning World and Olympic champion Savinova.