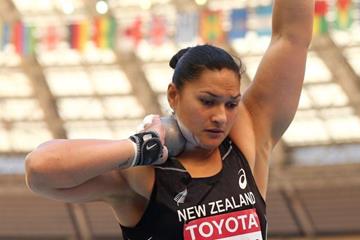 New Zealand’s Valerie Adams, one of the hottest favourites of this year’s IAAF World Championships, lived up to her billing with aplomb and secured an unprecedented fourth successive World title in the Shot Put with a best distance of 20.88m.

In fact, it was the first time that any woman has won four consecutive gold medals in the same individual event.

Adams had control of the competition from the start, reaching 20.41m in the first round, farther than anyone else in the world this year prior to Moscow.

She went five centimetres farther with her next effort and then put the destination of the gold medal beyond any possible doubt by firing her implement out to 20.88m, just two centimetres below her 2013 world-leading mark achieved in London just over two weeks ago.

A fourth-round foul was followed by 20.76m and, with the gold medal won, she finished off her series with 20.32m.

Behind Adams there was a splendid battle for the silver and bronze medals.

US champion Michelle Carter took second place at the end of the first round with 19.92m, just 32cm short of her recent US record, and she improved to 19.94m with her second attempt, only for China’s Gong Lijiao to edge in front by one centimetre with 19.95m later in the second round.

Neither woman improved with their next three throws although Germany’s European indoor champion Christina Schwanitz was edging closer to the podium with 19.72m in the second round and then 19.74m with her fifth attempt.

Schwanitz was lying fourth going into the final round and so went into the circle immediately ahead of the three women in the medal slots. With nothing to lose, she blasted the shot out to a personal best of 20.41m, a 21cm improvement on her previous best set earlier this summer to leapfrog Gong and Carter, neither of whom could respond.

Carter was disappointed as she had high ambitions of getting a medal at a global outdoor championship and following in the footsteps of her father Michael, who won the silver medal at the 1984 Olympic Gamess. Russia’s Yevgeniia Kolodko was left equally empty-handed.

Kolodko, the Olympic silver medallist who is coached by her father Nikolay, couldn’t rise to the occasion in front of her family and friends from distant Yakutia and finished fifth with 19.81m.

Just like on the 2013 world list, there was a huge gap between the top five and the best of the rest with China’s Li Ling finishing sixth with 18.39m.