In front of an estimated crowd of 21,200 spectators in the city’s Estadio Mangueirao, Reve had his second best result of the year, and the third best of his career, with the 2010 World junior silver medallist having already produced the current 2013 world-leading mark of the year with a leap of 17.46m in Havana at the Cuban National Championships on 16 March.

On a hot morning when temperatures reached 34 degrees Celsius, Lemos Silva delighted in the conditions and sped to the victory in the 100m with a South American record of 11.05 (+1.7).

Silva is displaying great form in the early part of the season, after running a windy 10.93 and a legal 11.13, the former South American record, last weekend in Campinas, Sao Paulo.

The race had good depth with the US pair of Mikele Barber and Chauntae Bayne second and third in 11.15 and 11.18 respectively.

“This is a great present for my mother (as Mother’s Day is observed this Sunday in Brazil). She will celebrate it the whole day. Now, my dream is to break 11 seconds. Even with 10.99 I will be very happy. I owe this to my coach (Katsuhico Nakaya), who has worked intensely to bring me to this level," said Lemos Silva.

Lemos Silva’s time was also a meeting record. US sprinter Gwen Torrence, the 1992 Olympic 200m champion, held the previous best with 11.07 since 1994, when the meeting was held in Sao Paulo.

Tajikistan’s Dilshod Nazarov won the men’s Hammer Throw, which was the second leg of the 2013 IAAF Hammer Throw Challenge.

The 31 year-old two-time Asian Games champion reached 78.49m for a season’s best to beat Czech Republic’s Lukas Melich, the 2013 world leader after his 79.00m throw in Tokyo a week ago, who was exactly a metre in arrears with 77.49m.

“This is a nice victory for me. I just came here to do my race without thinking too much about the rest. Now I can focus on getting ready for Moscow and perhaps improving my personal best (20.16 from 2011),” commented de Barros after his second win of the day.

Another excellent mark came from Colombia’s Rafith Rodriguez, the 2011 South American 800m champion, who won over two laps of the track in 1:44.70, the second best time of his career. The 23-year-old beat Brazil’s Kleberson Davide, who was second with 1:45.27.

Jamaica’s Patricia Hall won the 400m in a swift 50.86, close to her best of 50.71 from last year, while Argentina’s Rocio Comba posted 62.77m in the Discus to win and notch up her second national record of the season, as well as move up to second place in the South American all-time lists.

Brazil’s Mauro Vinicius da Silva admits he’s not at his best first thing in the morning but the World indoor champion still managed to win the men’s Long Jump with 7.91m (-0.3). His compatriot, 2010 World indoor bronze medallist Keila Costa, made it a Brazilian Long Jump double with a leap of 6.56m (-0.6).

The Grande Premio Brasil/Caixa Governo de Para de Atletismo meeting in Belem as the first stop of the three-leg 2013 domestic Brazilian Athletics Tour which will continue in Uberlandia on 16 May and finish in Sao Paulo three days later on 19 May. 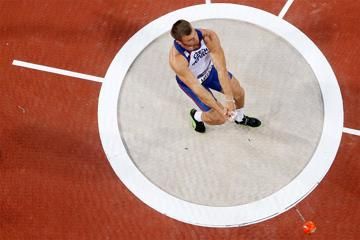