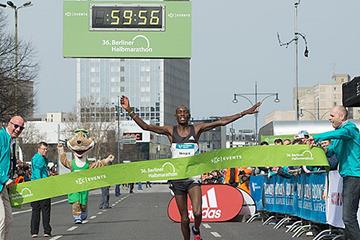 Mengich dips under 60 minutes in Berlin Half Marathon triumph

Kenya’s Richard Mengich made a resounding return to form at the Berlin Half Marathon on Sunday (3), returning from injury and taking victory by more than a minute in a personal best of 59:58.

His former countrywoman Elizeba Cherono, who has since switched nationality to the Netherlands, edged victory in a much closer contest in the women's race, her time of 1:10:43 giving her a seven-second winning margin over Susan Jeptoo.

In the men’s race, the pace pointed to a finishing time of about 60 minutes early on. However, the leading group quickly reduced with Mengich and Eritrea’s Simon Tesfay pushing the pace. They passed the 10km point in 28:35 with Emmanuel Ngatuny already a bit behind.

Germany’s Arne Gabius was fourth, trailing the leaders by about 100 metres. Mengich, who ran the Berlin Half Marathon for the fourth time, was eager to improve his personal best of 59:59, a time he ran in Berlin a year ago.

"It was windy during the second half of the race, but I desperately wanted to break the one-hour mark,“ said Mengich, who then left behind Tesfay soon after 10km.

Running on his own in the second half, Mengich managed to achieve his goal, but it was as close as it gets. The Kenyan won in 59:58, improving his best time by a single second.

"I suffered a stress fracture last June and was injured for a long time," he said. "This was my first race after the injury so I am very happy with my result."

Kenya's 2010 world half marathon champion Wilson Kiprop, one of the pre-race favourites, dropped out at about 12km.

Strong finish wins it for Cherono

In the women’s race, Susan Jeptoo took a commanding lead early on. Jeptoo, originally from Kenya but now competing for France, passed the 10km mark in 32:45 and was 33 seconds clear of Elizeba Cherono.

But Cherono, who was second in Berlin a year ago, gradually closed the gap during the second half of the race, and it was in the final kilometre when she finally overtook Jeptoo, winning by six seconds in 1:10:43.

"I am very happy with this victory," said Cherono. "It is my aim to run for the Netherlands in the half marathon at the European Championships in July."

Jeptoo took second in 1:10:49 and Poland’s Agnieszka Mierzejewska followed in third place with 1:11:41.