Shelly-Ann Fraser-Pryce comfortably booked her spot in the 200m final and, along with 110m Hurdles winner Andrew Riley, was one of the highlights of the third day of the Jamaican Championships on Saturday (22).

Olympic 110m Hurdles bronze medallist Hansle Parchment fell and hurt his ankle during warm-up. It left the way clear for Riley to win in 13.35 over Dwight Thomas 13.45 with Eric Keddo third in 13.72

Riley was happy with the win. “Every time you come out here and pull off a victory, it means a lot,” he said, adding that Parchment’s late withdraw was disappointing.

“It was a good run, I just wanted to make the team,” said Thomas. “The intensity kind of went after something happened to Parchment in the warm-up.”

Based on the Jamaica Athletics Administrative Association (JAAA) rules, Parchment could still be on the team for Moscow.

JAAA president Warren Blake said the fact that Parchment “has a top three ranking, and he came to the trials, and is the only other one, other than Riley and Thomas, with the A standard, he will be considered as long as he assure us that he is fit.”

Natoya Goule dipped under two minutes for the first time with 1:59.93 to take her first national 800m title, while her university team-mate Damar Forbes leapt 8.25m to take the men’s Long Jump title.

Goule could not hold back her emotions. “I am so happy right now, I am so proud of myself to run 1:59.9,” said Goule, who showered a lot of praise on her coach Mark Elliott.

Meanwhile, Fraser-Pryce ran 22.64 to qualify for the 200m final on Sunday. She won her semifinal ahead of Samantha Henry-Robinson (23.54). Sherone Simpson took semifinal two in 22.85 ahead of Patricia Hall (23.00), while Anneisha McLaughlin was the third semifinal winner in 22.88 ahead of Audra Sgree (23.44).

Stephanie McPherson continued her improvement this season with 50.16, the fastest time of the day, to beat Christine Day’s 51.91 in the women’s 400m semifinals.

Novlene Williams won the second semifinal in 50.95 ahead of Anastasia Le-Roy (51.79) while semifinal three went to Hall in 51.66 over Kaliese Spencer, who was credited with the same time. 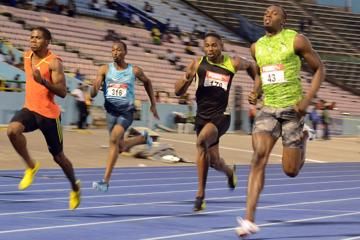 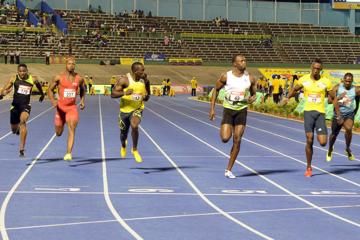